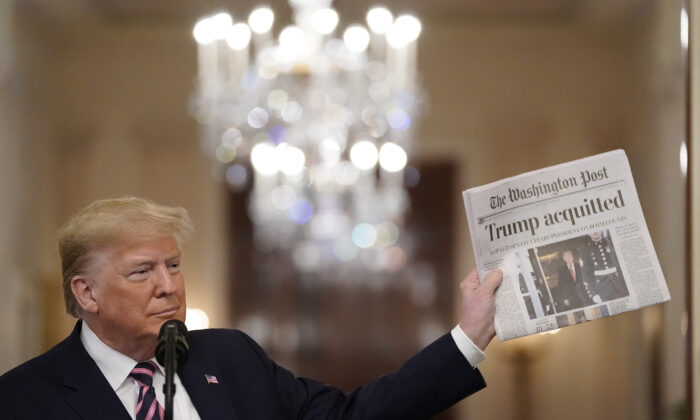 President Donald Trump holds a copy of The Washington Post as he speaks in the East Room of the White House one day after the U.S. Senate acquitted on two articles of impeachment, on Feb. 6, 2020. (Drew Angerer/Getty Images)
Viewpoints

Trump Emerges From Impeachment Debacle Stronger Than Ever

The amazing thing about the 2020 election is that, from my perspective, it’s already over.

Whether it will be President Donald Trump versus Joe Biden, or Trump versus Elizabeth Warren, or even the best possible matchup for the current president—Trump versus Bernie Sanders—I believe none of these candidates can defeat Trump in the general election in November.

Not only did Trump survive the Democrats months-long impeachment gambit, he’s come out of it stronger and more robust than ever. If the goal of the impeachment spectacle was to weaken this president, it’s becoming increasingly evident that the strategy didn’t work.

On Feb. 4, the same day as the president’s State of the Union address, Gallup released a new poll that placed Trump’s approval rating at 49 percent. Previously, Trump’s highest approval rating in the Gallup poll had been 45 percent, when he entered the Oval Office, in January 2017.

For him to exceed that number while the impeachment farce was still ongoing is truly amazing.

In his State of the Union address, it took Trump the first half-hour to list all the economic successes that have occurred during his time in office.

Trump wasn’t supposed to be an amazingly successful president. Far from it. The script the Democrats and the progressive left had been writing since 2017 was for an increasingly unpopular and isolated Trump to retreat to a bunker-mentality as he waited to be removed from office, either by the impeachment or by the voters in the next election. But current events aren’t cooperating with that script.

Trump Is Writing His Own Script

As he builds on his successes, Trump also is deliberately going after traditional Democratic voters. And it’s working. The blue-collar working class is flocking to him, much to the Democrats’ sullen amazement.

At first, Democrats found it laughable that this garish cartoon figure would openly boast he was targeting and going after their entrenched constituencies.

The polls show it’s not just empty talk; Trump is doing it. He’s going into places once considered deep blue strongholds such as Michigan, New Jersey, and Minnesota, and is in the process of building a coalition of formerly Democratic voters that will likely dwarf the number who voted for him in 2016.

If the figures from Trump rallies that campaign director Brad Parscale is sharing are accurate, almost half of Trump’s audience at some of these massive political rallies weren’t Republican voters. They are Democrats and independents and many either didn’t vote for Trump in 2016 or if they did, it was the first time they ever had voted for a Republican presidential candidate.

The latest polls show Trump’s support among black registered voters at around 34 percent,  That’s potentially troubling news for the Democratic Party, since Trump received only 8 percent of the black vote in 2016 while running against Hillary Clinton.

Ronald Reagan never topped 12 percent support among black voters in his landslide victories over Jimmy Carter and Walter Mondale. Trump garnering even 25 percent of the black vote would mean a massive landslide.

Democrats Still Have No Trump Antidote

As Trump has made overtures to the black community and other minority groups, Democrats have been reduced to relying on appeals to identity politics and name-calling.

They have endlessly claimed that Trump is a racist and believe that saying this can blind minority voters to the improvements Trump is bringing to their communities. Democrats had more than three years to come up with an effective counter-strategy to Trump’s frank and direct outreach to American minority communities.

Instead of trying to grow their party, Democratic leadership surprisingly seems hellbent on shrinking their base as much as possible. Their fixation on 100 percent ideological conformity is destroying that organization.

Democrats made a huge mistake in 2016 simply writing off the crossover voters that Trump attracted. The next election is approaching and if anything, Democrats are even more dismissive of defectors than they were in the last election. I’ve seen no real attempt from them to woo these voters back into the Democratic fold.

Far from coming up with a strategy to reverse this alarming trend, the Democratic leadership has instead doubled down on the kind of behavior that alienated these former Democrats in the first place.

Longtime Democratic strategist James Carville belatedly tried to sound the alarm on MSNBC, but it’s far too late. The radicals are now in charge, and there shall be no directional change for an increasingly out-of-touch political entity that’s headed for the wilderness.

Far from driving Trump out of power, the Democratic Party is in the process of exiling itself from power, perhaps for more than a decade.