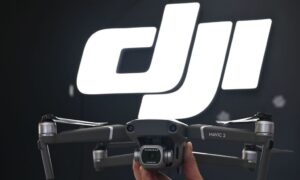 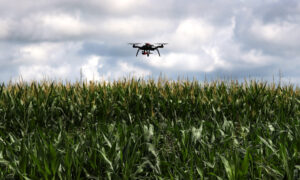 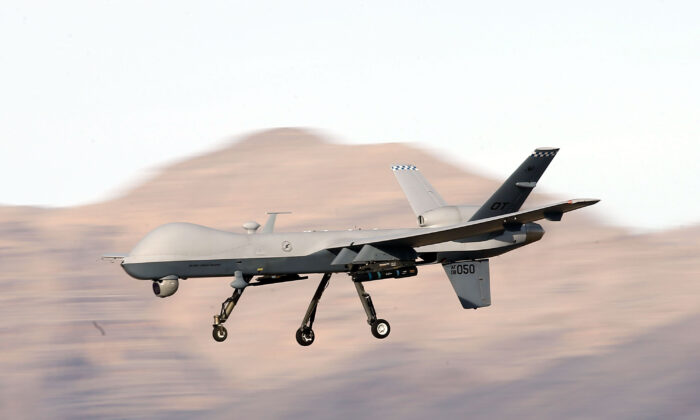 An MQ-9 Reaper drone flies by during a training mission at Creech Air Force Base in Indian Springs, Nevada, on Nov. 17, 2015. (Isaac Brekken/Getty Images)
Policy

The Trump administration has relaxed export restrictions for certain types of armed drones, with a State Department official telling reporters on July 24 that the move helps the security interests of both the United States and its allies.

The move, which took the form of a policy determination signed by President Donald Trump, will also help American industry by letting U.S. defense contractors sell more of their unmanned aerial systems (UAS), commonly referred to as drones, to other countries.

The administration’s action effectively bypasses part of the 33-year-old Missile Technology Control Regime (MTCR) agreement, which has the form of an informal political understanding between states and is intended to stop the proliferation of nuclear arms.

Trump’s action works by reclassifying some types of drones. Under the revamped rules, drones that fly at speeds below 800 kilometers per hour (497 miles per hour) are no longer subject to the agreement’s strict export curbs, clearing the way for America’s allies to buy them.

The White House said in a statement on July 24 that the move, possible by invoking “national discretion,” intends to improve the standards for exporting unmanned aerial systems under the agreement. As it applies to drones, the agreement “is in dire need of modernization,” the White House stated, adding that it puts American military and industrial capability at a disadvantage.

“Not only do these outdated standards give an unfair advantage to countries outside of the MTCR and hurt United States industry, they also hinder our deterrence capability abroad by handicapping our partners and allies with subpar technology,” the statement noted.

Assistant Secretary Clarke Cooper, who heads the State Department’s Bureau of Political-Military Affairs, told reporters via teleconference on July 24 that while the update makes the MTCR “more reflective of the technological realities,” it doesn’t impact U.S. commitments to nuclear nonproliferation.

“The United States remains a committed member of the MTCR, and we hold it as an important nonproliferation tool to curb the spread of high-end missile technologies to countries such as North Korea and Iran. Preventing the use and spread of WMD and their means of delivery remains a Trump administration priority,” Cooper said.

He told reporters that several foreign governments have expressed interest in buying U.S.-made drones for purposes including for intelligence and reconnaissance, and to support counterterrorism and border security missions.

The White House statement noted the move to revise America’s commitment under the agreement as it relates to drones was taken on a unilateral basis, after two years of negotiations with MTCR partners failed to reach a consensus.

Critics of the change say it makes the world more dangerous by increasing the risk that deadly weapons will fall into the wrong hands.

Sen. Bob Menendez (D-N.J.), ranking Democrat on the Senate Foreign Relations Committee, called the move a “reckless decision” that “makes it more likely that we will export some of our most deadly weaponry to human rights abusers across the world.”

“To disregard this policy now is likely to undermine the credibility and influence of the MTCR generally, which also coordinates international controls on the sale and spread of dangerous ballistic missiles and technology around the world,” Menendez said in a statement.

Sen. Jim Risch (R-Idaho), chairman of the Senate Foreign Relations Committee, said he supports the MTCR agreement, but that its strict export rules have served U.S. adversaries and weakened the U.S. defense industry.

“For too long, the restraint of the international community with regard to exports of large unmanned aircraft has created an opportunity for the Chinese military to advance its defense technology and industrial base, and to build new defense relationships around the world, including with traditional U.S. partners,” he said in a statement.

The move adds to the list of international treaties that the United States has withdrawn from during Trump’s tenure, including the Intermediate-Range Nuclear Forces Treaty, the Iran nuclear deal, and the Paris climate accord.