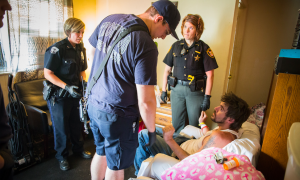 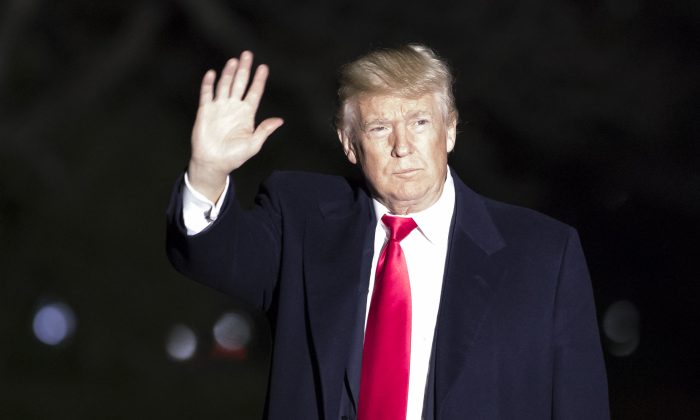 The approximately $100,000 for his third quarter salary was given to Health and Human Services (HHS) to be put toward combatting the opioid crisis.

Eric Hargan, acting HHS secretary, made the announcement at the White House press briefing on Nov. 30.

Hargan said Trump’s decision to donate his salary is “a tribute to his compassion, to his patriotism, and a sense of duty to the American people.”

Hargan confirmed that HHS would use the money toward a large-scale public awareness campaign about the dangers of opioid addiction.

“The President is personally dedicated to defeating this crisis because addiction hits home for so many of us,” Hargan said. “You heard him share the story in his opioid speech about how he lost his own brother to alcoholism. And speaking personally, opioid addiction has been a presence in my hometown, in my family, for years.”

In October, Trump designated the opioid crisis as a nationwide public health crisis.

The declaration included ways to increase access to treatment and imposed stricter requirements on opioid prescriptions.

The opioid crisis was fueled by prescription painkillers such as OxyContin and Vicodin. Eighty percent of new heroin users start their habit with prescription opioids. When the prescription pills run out or become too expensive on the street, the new addict replaces them with heroin and, more recently, fentanyl.

The president’s Council of Economic Advisers (CEA) estimated that the cost of the opioid crisis in 2015 was $504 billion, or 2.8 percent of GDP.

This is over six times larger than the most recent estimated economic cost of the epidemic.

CEA said previous estimates greatly understated the economic cost by undervaluing the most important component of the loss: fatalities resulting from overdoses. In 2015, more than 33,000 Americans died of a drug overdose involving opioids.

The death toll so far in 2017 is even higher, mostly due to synthetic opioids such as fentanyl and carfentanil. Fentanyl  is 50 times more powerful than heroin and 100 times more potent than morphine.

“Together, we will face this challenge as a national family with conviction, with unity, and with a commitment to love and support our neighbors in times of dire need. Working together, we will defeat this opioid epidemic,” Trump said in a statement on Nov. 20.