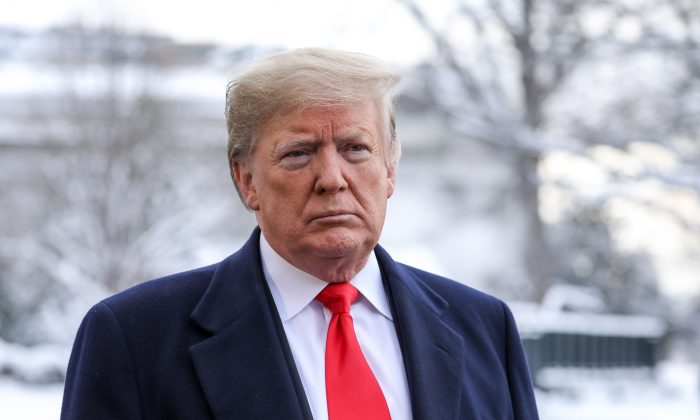 President Donald Trump speaks to reporters on the South Lawn of the White House, on Jan. 14, 2019. (Holly Kellum/NTD)
US News

President Donald Trump donated his entire salary from the third quarter of 2018 to fight alcoholism.

The $100,000 went to the National Institute on Alcohol Abuse and Alcoholism, the White House told The Associated Press.

The institute is part of the National Institutes of Health. On its website, the institute is described as “the lead agency for U.S. research on alcohol use disorder, and other health and developmental effects of alcohol use.”

“Our mission is to support research, and then translate and disseminate research findings to reduce alcohol-related problems,” the website says.

Trump has said he’s never had any alcohol after being affected by his brother’s heavy drinking.

“I had a brother, Fred. Great guy, best-looking guy, best personality, much better than mine,” Trump said during a speech in 2017. “But he had a problem. He had a problem with alcohol.”

“He was substantially older and I listened to him and I respected him. He would say it over and over and over again. And to this day, I’ve never had [a] drink. And I have no longing, I have no interest in it,” Trump said. “I learned because of Fred. He was a strong guy but it was a tough, tough thing that he was going through.”

The donation is part of a tradition that Trump established when he took office. The president pledged as a candidate in 2016 not to accept the $400,000 presidential salary he would get if he was elected. Since then, he’s donated his quarterly paychecks to various federal departments and agencies.

As part of a post touting Trump’s accomplishments during his first two years, the White House on Jan. 20 noted, “Each quarter since taking office, President Trump has donated his salary, fulfilling a promise he made to the American people.”

He donated his third quarter 2017 salary, for instance, to the Department of Health and Human Services (HHS), which was told to use the money to help combat the opioid crisis.

Eric Hargan, acting HHS secretary, said during an announcement that the donation was “a tribute to [Trump’s] compassion, to his patriotism, and a sense of duty to the American people.”

He said the agency would use the money for a public-awareness campaign about the dangers of opioid addiction.

“The president is personally dedicated to defeating this crisis because addiction hits home for so many of us,” Hargan said. “You heard him share the story in his opioid speech about how he lost his own brother to alcoholism. And speaking personally, opioid addiction has been a presence in my hometown, in my family, for years.”

Trump also donated $100,000 to the Small Business Administration, with the agency’s head, Linda McMahon, accepting a check at a White House briefing in October 2018. She said the funds would go toward a training program that helped veterans interested in starting their own businesses.

“I would like to thank the president for his generosity and for his support of the Small Business Administration. He clearly understands the value of small businesses. There are approximately 30 million of them in this country, and I’m very happy to be their advocate,” McMahon said at the briefing.

“We’re going to establish a seven-month intensive training program called Emerging Leaders. It’s an adaptation of that program for our veterans, helping them transition from military life into private sector if they desire to start their own jobs and their own companies and be entrepreneurs,” she said.