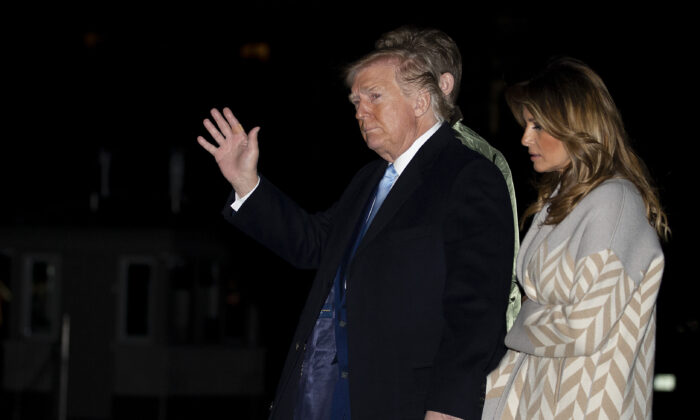 President Donald Trump and First Lady Melania Trump arrive at the White House in Washington on Jan. 5, 2020. The Trumps were returning from spending the holidays at Mar-a-Lago in Palm Beach, Fla.(Tasos Katopodis/Getty Images)
Politics

Asked if Trump favors delaying the trial to focus on Iran, Conway told reporters in Washington: “It looks like [House Speaker] Nancy Pelosi favors a delay in the impeachment process, because she hasn’t bothered to send over the articles of impeachment from the House. Which is it? Is the president is an imminent threat to the republic, a clear and present danger who must be removed immediately? Or did she take a little mini-sabbatical over the break and has decided when to send over the articles of impeachment?”

Pelosi has withheld the articles of impeachment from the Senate after the House voted on Dec. 18, 2019, to impeach Trump.

“Why would he want to delay the trial? He knows the trial is going nowhere. He wants a full and fair trial, but that doesn’t mean a lengthy one. Those articles of impeachment are very thin,”  Conway said.

Sens. Lindsey Graham (R-S.C.) and Josh Hawley (R-Mo.) are attempting to force Pelosi to submit the articles to the Senate. Graham said during an appearance on Fox News’ “Sunday Morning Futures” that he’d push for a change to the Senate rules if the articles aren’t received this week.

“My goal is to start this trial in the next coming days, not let Nancy Pelosi take over the Senate,” he said.

“We’ll use the Clinton model, where you take the record established in the House, let the House managers appointed by Pelosi make the argument, let the president make his argument why the two articles are flawed, and then we’ll decide whether we want witnesses. But this should be done in a couple of weeks,” he said, echoing Senate Majority Leader Mitch McConnell (R-Ky.).

Hawley said he was introducing on Jan. 6 a change to Senate rules, accusing Pelosi of “trying to obstruct the Senate trial.”

“We need to change the Senate rules to allow the Senate to dismiss this case if she refuses to send the articles over,” he said during an appearance on Fox News.

Constitutional scholar Jonathan Turley, a George Washington University law professor, said on Jan. 6 that the Senate could eliminate “the courtesy of waiting for the House” or hold “a summary vote in light of the House’s failure” to send the articles over. McConnell said on Jan. 3 that he expects the articles to be sent to the Senate “soon.”

Pelosi has declined to publicly comment on a timeline for sending the articles over. She’s said she’s withholding the articles because she wants the Senate, which is controlled by Republicans, to hold a “fair trial.”

On Jan. 3, she accused McConnell of assisting Trump in an alleged cover-up of the president’s abuse of power.

“In December, the House upheld its Constitutional duty to defend democracy For The People, honoring the vision of our Founders for a Republic. In an impeachment trial, every U.S. Senator is required to take an oath to ‘do impartial justice according to the Constitution and laws,” Pelosi said in a statement.

“For several months, the House has subpoenaed documents and witnesses which the President stonewalled. These cases are now in the courts. While the House nevertheless was able to obtain compelling evidence of impeachable conduct, Leader McConnell knows full well that the President’s obstruction of the House impeachment inquiry is unprecedented and in defiance of our system of checks and balances.”

“The American people deserve the truth. Every Senator now faces a choice: to be loyal to the President or the Constitution. The GOP Senate must immediately proceed in a manner worthy of the Constitution and in light of the gravity of the President’s unprecedented abuses. No one is above the law, not even the President.”

Senate Minority Leader Chuck Schumer (D-N.Y.) said on Jan. 5 that Democrats hope to convince four Republicans to vote to bring witnesses in to testify to the Senate.

“You can’t have a fair trial without witnesses and documents, particularly those that were right at the scene of the charges. But four Republican senators can join us. We have the ability to require votes on the four witnesses we have asked for, whether there’s an agreement or not. We have the ability to ask for the documents. And I hope, pray, and believe there’s a decent chance that four Republicans will join us,” Schumer said.

He said President Bill Clinton’s 1999 trial was different because fact witnesses had already testified, whereas in this case, some of Trump’s top advisors haven’t testified yet. “These are four witnesses who are eyewitness to the main charge against the president, that he withheld the aid for political benefit to himself,” he said.