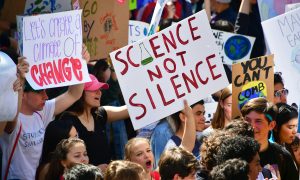 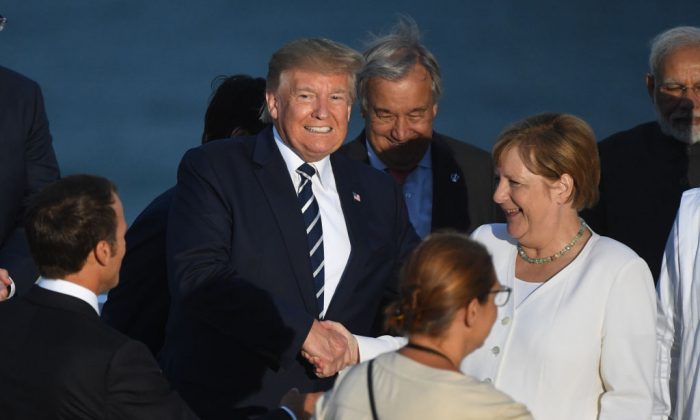 U.S. President Donald Trump shakes hands with Germany's Chancellor Angela Merkel as G7 leaders and guests gather for a family picture in front of the Biarritz lighthouse on the second day of the annual G7 summit in Biarritz, France, on Aug. 25, 2019. (Andrew Parsons - Pool/Getty Images)
Politics

Trump Doesn’t Attend the G7 Climate Session, Has Meetings With India and Germany

President Donald Trump did not attend the G7 climate change session on Aug. 26.

Stephanie Grisham, a White House spokeswoman, when asked why Trump didn’t attend, said that he instead had meetings with other world leaders.

“The President had scheduled meetings and bilaterals with Germany and India, so a senior member of the Administration attended in his stead,” Grisham said in a statement to reporters.

He added he had held long and in-depth talks with Trump on fires in the Amazon rainforest, saying Trump is “fully engaged” and “shares our objectives” in the G7 effort, according to The Guardian.

Macron told reporters not to read too much into Trump’s decision to skip the climate session, insisting that the United States is aligned with the rest of the G7, Reuters reported.

He said, “You shouldn’t interpret the American president’s absence… the U.S. are with us on biodiversity and on the Amazon initiative.”

According to The Associated Press, Trump’s meeting with German Chancellor Angela Merkel was delayed for approximately two hours.

Trump then met with India’s Prime Minister Narendra Modi, and he was asked about attending the climate session. Trump told AP that he wants clean air and water.

All G7 countries indicated they would give technical and financial help to battle the Amazon fires. That includes the United States, Japan, Germany, France, Italy, Britain, and Canada.

They had agreed to provide $20 million in aid to stop the fires.

On Sunday, the president’s team clarified statements incorrectly interpreted by many media as meaning he regretted a trade war with the Chinese regime.

“This morning in the bilat with the U.K., the president was asked if he had ‘any second thought on escalating the trade war with China’. His answer has been greatly misinterpreted. President Trump responded in the affirmative—because he regrets not raising the tariffs higher,” White House spokeswoman Stephanie Grisham said in a statement.

White House economic adviser Larry Kudlow offered a different explanation when interviewed Sunday by CBS’ “Face the Nation,” saying Trump “didn’t quite hear the question,” according to The Associated Press.

Asked if he had any second thoughts about escalating the U.S. trade war with China, Trump replied: “Yeah, sure. Why not?”

Trump then said: “I have second thoughts about everything” when another reporter repeated the question.

A week ago, Trump said he would raise duties on $250 billion worth of Chinese products to 30 percent.

“For many years China (and many other countries) has been taking advantage of the United States on Trade, Intellectual Property Theft, and much more. Our country has been losing hundreds of billions of dollars a year to China, with no end in sight,” Trump said in an Aug. 23 Twitter post.