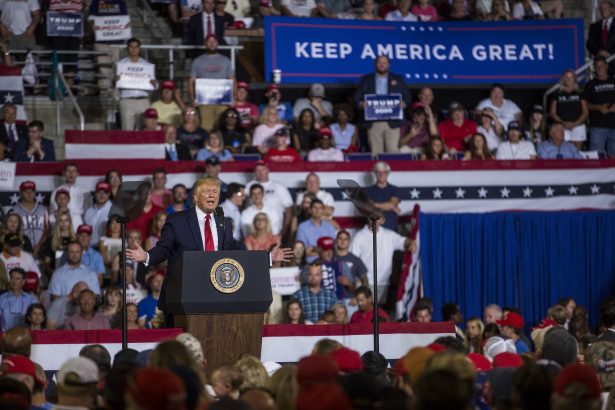 President Donald Trump distanced himself from a North Carolina crowd’s spontaneous chant of “send her back” when he made a reference to Rep. Ilhan Omar during a rally on July 17.

When he was asked about the chant, Trump said he “was not happy.”

“I was not happy with it, I disagree with it, but again I didn’t say that, they did,” Trump told reporters in the Oval Office. “It was quite a chant,'” he said.

Trump added that he felt “a little bit badly” when it began, adding that to quell the chanting, he began speaking “very quickly” in an attempt to drown out the crowd.

During the rally, Trump didn’t acknowledge the crowd’s chant and said, “And obviously and importantly, Omar has a history of launching vicious anti-Semitic screeds.”

The chant appeared to refer to Trump’s July 14 tweet where he asked why several unnamed progressive Democrats don’t “go back and help fix the totally broken and crime infested places from which they came, then come back and show us how it is done.” He didn’t suggest that a government agency forcefully remove them.

Omar responded on Twitter, saying that “I am where I belong,” adding “you’re just going to have to deal!”

Apart from Omar, who was born in Somalia, the other three Democratic lawmakers that Trump referenced—Reps. Ayanna Pressley (D-Mass.), Alexandria Ocasio-Cortez (D-N.Y.), and Rashida Tlaib (D-Mich.)—were born in the United States.

Omar has made a number of comments condemned by lawmakers on both sides of the aisle as anti-Semitic, including claiming that American politicians only support Israel because of financial compensation.

Omar said in February in response to statements from critics, “This is why I unequivocally apologize.”

Trump went through a laundry list of things Omar has said during the rally, which prompted the crowd to yell, “send her back.”

He has credited the four with helping him achieve a four-point bump in the polls, after he lambasted them for bad-mouthing America, saying that they “hate our country.”

On July 17, Trump wrote on Twitter, “New Poll: The Rasmussen Poll, one of the most accurate in predicting the 2016 Election, has just announced that ‘Trump’ numbers have recently gone up by four points, to 50%. Thank you to the vicious young Socialist Congresswomen. America will never buy your act!”

Also during the rally, Trump described Antifa as an organization rife with “evil” and “bad people.”

“They don’t get the bad press, the press doesn’t want to talk to them. They are very evil: they are hitting people over the head with sticks, I mean bats even. They’re whacking people with bats,” the president told the crowd of supporters.

Trump also joked that Antifa members wear masks so as to conceal their identity. “They’re very brave, they always show up with the mask and they’re covered, because then they go home to mom and dad, they don’t want mom and dad to know where they were,” Trump said.