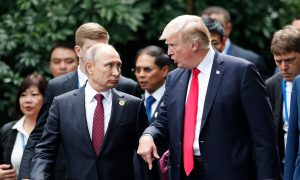 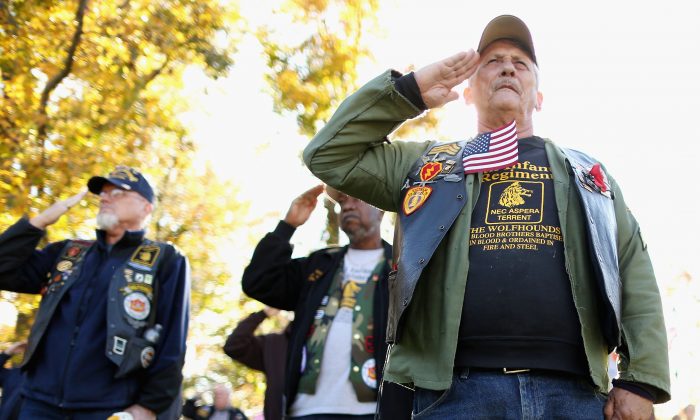 Vietnam War veterans salute at the Vietnam Veterans Memorial on the National Mall in Washington on Nov. 11, 2013. (Chip Somodevilla/Getty Images)
US News

President Donald Trump on Nov. 10 signed into law that March 29 be designated “National Vietnam War Veterans Day” to honor the close to 500,000 American troops who fought in Vietnam and, many say, were not properly honored for their sacrifice.

“Throughout this Commemoration of the 50th Anniversary of the Vietnam War, and every March 29 thereafter, we will honor all those who answered our Nation’s call to duty,” Trump said in the proclamation.

“We vow to never again confuse personal disapproval of war with prejudice against those who honorably wear the uniform of our Armed Forces,” he said. “With conviction, our Nation pledges our enduring respect, our continuing care, and our everlasting commitment to all Vietnam veterans,” he said.

Trump made the announcement after arriving in Vietnam, as part of his Asia tour. He held a press conference with seven Vietnam veterans where he thanked them for their service ahead of Veterans Day. He said, according to a transcript, “Our veterans are a national treasure, and I thank them all for their service, sacrifice, and patriotism.”

During the meeting in a room of the Hyatt Regency in Da Nang, according to a press pool announcement, Trump invited the veterans to speak, and as one of them choked up while speaking, Trump embraced him.

“To each of you with me today, you are the heroes who fulfill your duty to our nation,” Trump said. “And each of you, under the most difficult conditions, did what you had to do, and you did it well.”

“I’m very honored to be representing our country, and I will say that, when you speak of honors, one of my great honors is to present the people standing right behind me—great, great warriors and veterans of the Vietnam War,” he said.

Vietnam veterans carry a heavy weight on their shoulders. After the war, where more than 58,000 Americans lost their lives, they returned home to a country where they were often shunned.

“Today, I’m signing a proclamation to honor the veterans of the Vietnam War,” Trump said.

The Nov. 10 proclamation is part of a 13-year commemoration beginning in 2012 for the 50th Anniversary of the Vietnam War. In it, Trump said, “We salute our brave Vietnam veterans who, in service to our Nation and in defense of liberty, fought gallantly against the spread of communism and defended the freedom of the Vietnamese people.”

Trump noted that 50 years ago, in 1967, close to 500,000 American troops were fighting alongside nearly 850,000 allied forces to defend South Vietnam. He said that during Veterans and Military Families Month, and while the United States is observing Veterans Day, he is in Vietnam with business and political leaders “to advance the interests of America, and to promote peace and stability in this region and around the world.”

“I cherish this opportunity to recall, with humility, the sacrifices our veterans made for our freedom and our Nation’s strength,” he said.

“During this Commemoration of the 50th Anniversary of the Vietnam War, we embrace our responsibility to help our Vietnam veterans and their families heal from the heavy toll of war,” he said.

Trump said that in his administration, “I promise to continue coordinated efforts to recognize all veterans of the Vietnam War for their service and sacrifice, and to provide them with the heartfelt acknowledgment and gratitude that they and their families so richly deserve.”

He had also stated this promise in another release, published by the White House office of the press secretary on Nov. 9, where Trump brought attention to scandals within the Department of Veterans Affairs (VA), and said this has shown “the need for providing our veterans with more support.”

To help repair the department, the Trump administration is enforcing new accountability standards for VA personnel, fired over 1,163 VA employees, created new protections for whistleblowers to make it easier to identify VA employees not meeting standards, and is expanding VA services to make it more accessible to veterans, among other changes.

The announcement reiterated Trump’s remarks at a VA event on Aug. 3, where he stated, “We will not rest until all of America’s great veterans can receive the care they so richly deserve. Tremendous progress has been made in a short period of time.”