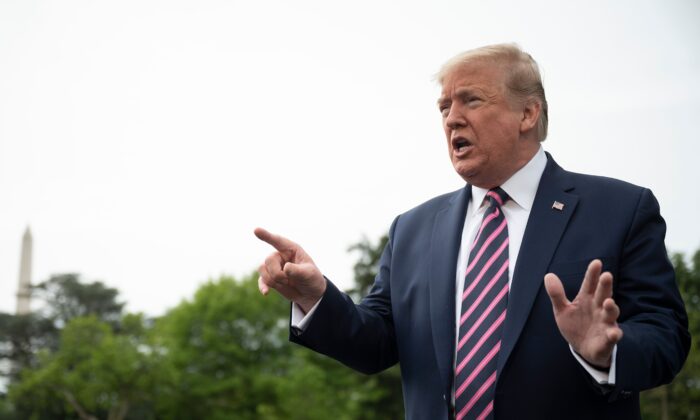 President Donald Trump speaks as he departs the White House in Washington en route to Arizona on May 5, 2020. (Jim Watson/AFP via Getty Images)
Trump Administration

President Donald Trump called a video that purports to show the shooting death of a Georgia man “very disturbing.”

Ahmaud Arbery, 25, was jogging in a neighborhood outside Brunswick, Georgia, on Feb. 23 when former police officer Gregory McMichael and his son chased him home.

“I will say that looks like a really good young guy,” the president said of Arbery. “It’s a very disturbing situation to me and my heart goes out to the parents and the family and the friends, but yet we have to take it, law enforcement is going to look at it.”

In the incident a struggle for a gun ensued, according to video footage that was released this week, which sparked outrage on social media. Arbery was fatally shot on a residential street after running unarmed through a neighborhood, and some reports said that he was jogging.

The footage was captured by an unnamed witness. It showed the father confront Arbery before his son opened fire.

“Justice getting done is the thing that solves that problem,” Trump said, adding he trusted Georgia Gov. Brian Kemp and state law enforcement to handle the investigation.

Trump noted that there could be more details that have not been revealed in the case.

“You know, it could be something that we didn’t see on tape,” he added. “There could be a lot of, if you saw things went off tape, and then back on tape, but it was troubling.”

“I mean, to anybody that watched it, certainly it was a disturbing or troubling video no question about that,” Trump said. “But they have very good law enforcement in the state of Georgia and I’m sure they are going to come up with exactly what happened. It’s a sad thing. Very sad thing. I hate to see that.”

The Georgia Bureau of Investigations (GBI) said late Thursday that Gregory McMichael, 64, and Travis McMichael, 34, were arrested and would be taken to the Glynn County Jail on murder and aggravated assault charges.

Their arrests came about two days after the video that appears to show the deadly confrontation was posted online, drawing significant backlash on Twitter.

Wanda Cooper, Arbery’s mother, told CNN on May 3 that police told her that her son was involved in a burglary. They said there was a confrontation between her son and the homeowner over a gun.

“According to that law, you actually have to be observing the crime or be in the immediate knowledge of the crime,” family attorney Lee Merritt said. “The only thing they have ever said is … that Ahmaud stopped by a house that was under construction and he looked through the window. We don’t know if that happened or not, but even if that did happen that is not a felony that would invoke the citizen’s arrest statute that would make this allowable.”