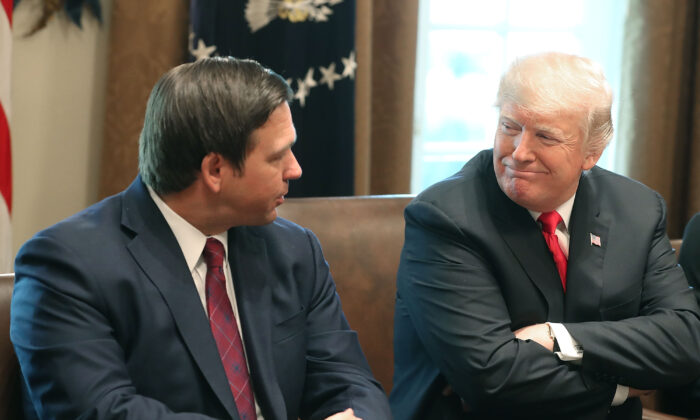 Florida Governor-elect Ron DeSantis (R) sits next to President Donald Trump during a meeting with Governors elects in the Cabinet Room at the White House on Dec. 13, 2018. (Mark Wilson/Getty Images)
2024 Election

Trump, DeSantis Try to Tamp Down Rumors of Rift

“I get along great with Ron,” Trump said on Fox News.

“I have a very good relationship with Ron and intend to have it for a long time,” he added.

The Republican has since become one of the most popular Republicans in the country due to his policy actions on COVID-19, critical race theory, and law enforcement, including his opposition to COVID-19 vaccine mandates.

The 2024 presidential race is considered wide open because of President Joe Biden’s low approval ratings, but while many prominent Republicans have said they won’t run if Trump does, DeSantis has declined to make the same promise.

The pair have also made several comments in recent days, with Trump calling out officials who won’t say whether they got a COVID-19 vaccine booster shot—DeSantis has avoided answering that question multiple times—while DeSantis expressed regret for not pushing back when Trump encouraged Americans in the spring of 2020 to stay home to “stop the spread” of the CCP (Chinese Communist Party) virus, which causes COVID-19.

And anonymously-sourced reports from several outlets claimed that Trump has been criticizing DeSantis behind closed doors and is irritated DeSantis won’t commit to not running in 2024.

DeSantis, who is currently running for re-election, last week said “this is what the media does” and “you cannot fall for the bait.”

“You know what they’re trying to do, so just don’t take it. Just keep on keeping on. We need everybody united for a big red wave in 2022. We’ve got to fight the left, and not only fight, but beat the left. And that’s what we’re doing in Florida,” he said.

Christina Pushaw, DeSantis’s press secretary, told The Epoch Times in an email that the stories “were merely attempts by corporate media activists and political operatives to distract from the dumpster fire that the Biden Harris Administration has become.”

Trump praised DeSantis on Fox News for helping, while in the House of Representatives, challenge the Russia-Trump narrative and said he’s “done a really terrific job” after becoming governor of Florida.

The stories, he added, are “totally fake news.

“I think Ron said last week, he said it very publicly, he says the press is never going to get in the middle of my friendship with Donald Trump, we’re not going to do that stuff. And he said it very strongly, I thought it was very interesting, actually. And very nice,” Trump said. “But he said that, and I agree with him on that 100 percent.”