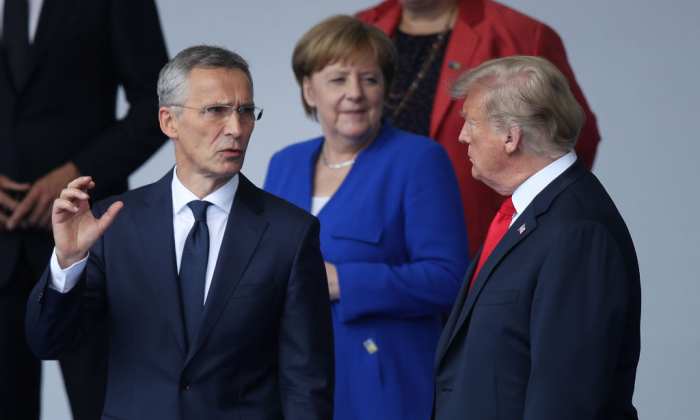 President Donald Trump harshly criticized Germany on July 11 for buying vast amounts of energy from Russia while relying on the United States to deter the threat of Moscow’s threatening geopolitical ambitions.

Trump aired his criticism in a tense exchange with NATO Secretary General Jens Stoltenberg as cameras rolled during a pre-breakfast media opportunity usually reserved for pale and formulaic political remarks.

“Well, I have to say, I think it’s very sad when Germany makes a massive oil and gas deal with Russia, where you’re supposed to be guarding against Russia, and Germany goes out and pays billions and billions of dollars a year to Russia,” Trump said.

Although Trump did not name the Russian pipeline project, he was referring to Nord Stream 2, an expansion of the world’s largest undersea pipeline linking Russia to Germany. Russian state-owned gas company Gazprom owns the majority stake in the project, with half of the financing coming from a group of energy corporations from France, Austria, England, and Germany.

The United States has long opposed Nord Stream 2, saying it would undermine Europe’s security. In May, the State Department threatened to sanction the companies involved in the project.

The president said that Germany is “totally controlled by Russia because they will be getting from 60 to 70 percent of their energy from Russia and a new pipeline.”

“And the former Chancellor of Germany is the head of the pipeline company that’s supplying the gas,” Trump said, referring to Gerhard Schröder, the chairman of the board of directors of Nord Stream AG. ” Ultimately, Germany will have almost 70 percent of their country controlled by Russia with natural gas.”

Stoltenberg defended the Russian pipeline, saying that even during the Cold War some allies traded with Russia.

“You know, NATO is an alliance of 29 nations, and there are sometimes differences and different views, and also some disagreements. And the gas pipeline from Russia to Germany is one issue where allies disagree,” Stoltenberg said. “But the strength of NATO is that despite these differences, we have always been able to unite around our core task, to protect and defend each other, because we understand that we are stronger together than apart.”

Trump did not accept the explanation, asking, “How can you be together when a country is getting its energy from the person you want protection against?”

Jens Mueller, a spokesperson for Nord Stream 2, told The Epoch Times that Nord Stream 2 is a commercial project with five investors in the EU. Roughly half of the pipeline’s $9.5 billion price tag is financed by Germany’s Uniper and Wintershall, France’s Engie, Austria’s OMV, and Dutch-British oil giant Royal Dutch Shell.

“The implementation of our project is not subject to political sentiment but a comprehensive framework of permitting procedures following clearly defined legal requirements that are based on EU and national legislation as well as international conventions,” Mueller said. “Therefore, we do not participate in political speculation.”

On the afternoon of July 11, Trump discussed Nord Stream 2 with German Chancellor Angela Merkel but did not elaborate on the details. In remarks to reporters, Trump said the United States has a “tremendous relationship with Germany” and Merkel noted that “we are good partners.”

Trump’s concern about Nord Stream 2 and Germany’s business with Russia’s dominant energy companies is a new line of attack in a campaign to pressure America’s NATO allies to increase their military spending to the amount specified in NATO membership guidelines. The president has derided NATO since the early stages of his election campaign in 2016, calling it “obsolete and disproportionately too expensive.”

The threat of an emergent Russia was expected to be the key theme at the summit. In bringing to light Germany’s energy dependence on Moscow, Trump affirmed the assessments from his State Department, which has for months warned that Nord Stream 2 is a threat to the national security of America’s European allies.

Trump also established America’s position on Nord Stream 2 ahead of his meeting with Russian President Vladimir Putin on July 16.

The European Union is split on the pipeline issue. Germany and a handful of dominant union members support it. Nord Stream 2 largely follows the route of the existing Nordstream pipeline. Gazprom secured permits from Finland, Sweden, Denmark, and Germany to build the pipeline on the bed of the Baltic Sea.

Meanwhile, many smaller central and Eastern European members of the EU oppose the project, fearing that the pipeline would establish Russia’s dominance over the European gas market and free Moscow from funding a lucrative deal for Ukraine as a transit country.

Nord Stream 2 has been viewed as an intensely political project since Russia invaded Ukraine and annexed Crimea. Half of the gas that Gazprom sells to the European Union transits through Ukraine.

“Russia currently has the ability to supply gas to Europe across Ukraine. So adding Nord Stream 2 is not adding a new capability of supplying gas that doesn’t exist,” Kurt Volcker, the U.S. special representative for Ukraine negotiations, said on May 24.

“It is, rather, replacing one. And it is intended … purely as a political act by Russia in order to put Ukraine, and also to some degree the Baltic states and Poland, at a higher degree of vulnerability to Russian pressure. So it’s a purely political project.”

Trump’s pressure on NATO allies to increase military spending has so far worked. The president said that allies increased spending by $40 billion at his urging. But the figure is far short of what Trump demanded, with only a handful of the allies meeting their commitment.

“What good is NATO if Germany is paying Russia billions of dollars for gas and energy? Why are there only 5 out of 29 countries that have met their commitment?” Trump wrote on Twitter hours after the July 11 breakfast remarks. “The U.S. is paying for Europe’s protection, then loses billions on Trade. Must pay 2% of GDP IMMEDIATELY, not by 2025.”