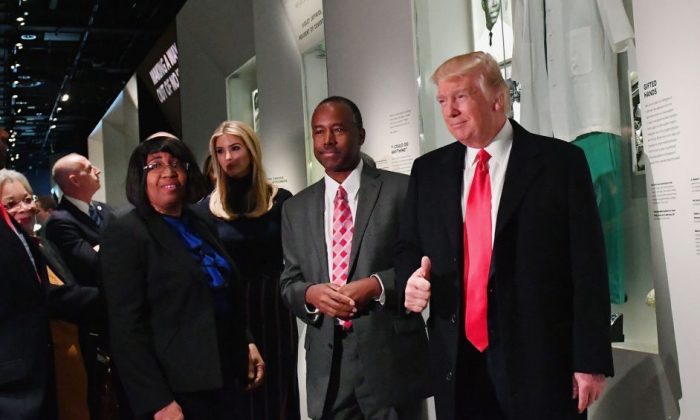 Former President Donald Trump and Housing and Urban Development nominee Ben Carson pose in front of the Ben Carson exhibit during a visit to the Smithsonian National Museum of African American History and Culture in Washington on Feb. 21, 2017. (Kevin Dietsch - Pool/Getty Images)
US

WASHINGTON—President Donald Trump on Tuesday denounced recent threats against Jewish community centers as “horrible” and “painful.” He said they are a “very sad reminder of the work that still must be done to root out hate and prejudice and evil.”

Trump made the remarks after touring the newly opened National Museum of African American History and Culture.

“This tour was a meaningful reminder of why we have to fight bigotry, intolerance and hatred in all of its very ugly forms,” Trump said.

His comments about recent threats at Jewish community centers across the country marked the first time he had directly addressed a wave of anti-Semitism and followed a more general White House denouncement of “hatred and hate-motivated violence.”

That statement, earlier Tuesday, did not mention the community center incidents or Jews. Trump “has made it abundantly clear that these actions are unacceptable,” that statement said.

The FBI said it is joining with the Justice Department’s Civil Rights Division to investigate “possible civil rights violations in connection with threats” to the centers.

On Monday, Trump’s daughter, Ivanka Trump, wrote on Twitter, “We must protect our houses of worship & religious centers,” and used the hashtag #JCC. She converted to Judaism ahead of her 2009 marriage to Jared Kushner. She joined her father at the African American museum tour.

America is a nation built on the principle of religious tolerance. We must protect our houses of worship & religious centers. #JCC