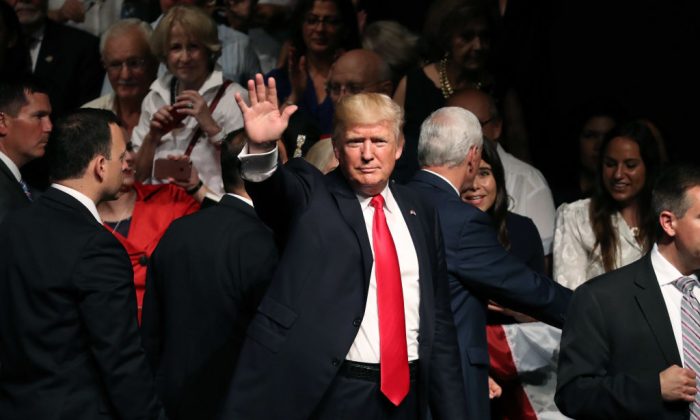 President Donald Trump waves after speaking about policy changes he is making toward Cuba at the Manuel Artime Theater in the Little Havana neighborhood on June 16, 2017 in Miami, Florida. (Photo by Joe Raedle/Getty Images)
US

President Donald Trump called out the Cuban regime and the crimes committed by communism more broadly while addressing the Cuban-American community in Miami’s Little Havana neighborhood on June 16.

Trump also announced he would reinstate some of the restrictions on Cuba that were removed by the Obama administration.

“We will not be silent in the face of communist oppression any longer,” he told the animated crowd.

Trump denounced the regime of Cuban leader Raul Castro as “barbaric,” and showed solidarity with Cuban exiles and dissidents fighting for freedom—a number of whom were in the audience.

“For nearly six decades, the Cuban people have suffered under communist domination,” Trump said. “To this day, Cuba is ruled by the same people who killed tens of thousands of their own citizens, who sought to spread their repressive and failed ideology throughout our hemisphere.”

“Many of you witnessed terrible crimes committed in service of a depraved ideology,” he added.

According to the Museum of Communism, which is run by the nonprofit Victims of Communism Memorial Foundation, an estimated 73,000 Cubans have been killed by the Cuban regime since Fidel Castro, the elder brother of Raul Castro, took power in 1959.

During his speech, Trump listed the Castro regime’s abuses, which include murdering innocents, persecuting dissidents and religious believers, bolstering the governments of socialist Venezuela and communist North Korea, and harboring criminals like the convicted murderer Joanne Chesimard, a former Black Panther member.

“This is the simple truth of the Castro regime. My administration will not hide from it, excuse it, or glamorize it, and we will never, ever be blind to it,” Trump said. “We know what is going on, and we remember what happened.”

“The exiles and dissidents here today have witnessed communism destroy a nation, just as communism has destroyed every single nation where it has ever been tried,” he said.

Trump said that he would deliver on his campaign promises to support Cubans in their bid for freedom, and to reverse former President Barack Obama’s Cuba policies.

The United States will strictly enforce the embargoes on tourism and trade to ensure American dollars do not enrich the Cuban military and the Cuban regime, Trump said. The Cuban military controls large portions of the country’s economy, including much of the tourism industry.

The United States also will not lift sanctions on Cuba until the country frees all political prisoners and dissidents, respects freedom of speech and assembly, legalizes all political parties, and allows for free elections under the auspices of the international community.

“With God’s help, a free Cuba is what we will soon achieve,” Trump said.