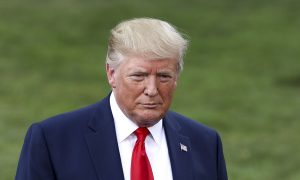 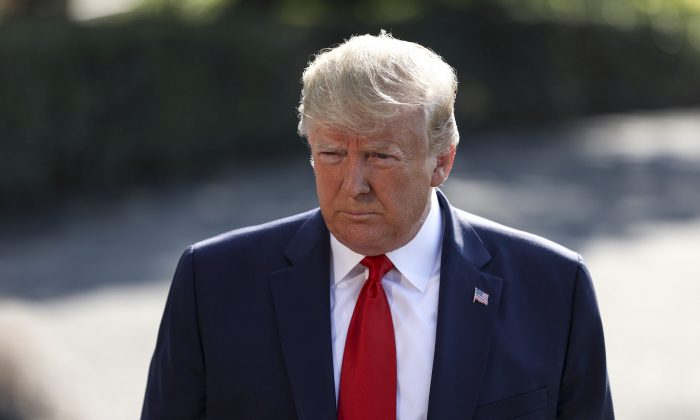 President Donald Trump has dismissed reports that said he made an unspecified “promise” to a foreign leader, which reportedly prompted an unidentified official within the intelligence community to file a whistleblower complaint.

The details of the complaint were reported by The Washington Post late Sept. 18, but specifics as to who the conversation was with or what was said still aren’t known. The Post cited two unidentified U.S. officials.

Trump took to social media to weigh in on the Post’s reporting, calling it “fake news” and denying accusations that he would “say something inappropriate with a foreign leader.”

“Another Fake News story out there—It never ends! Virtually anytime I speak on the phone to a foreign leader, I understand that there may be many people listening from various U.S. agencies, not to mention those from the other country itself. No problem!” Trump wrote on Sept. 19.

….Knowing all of this, is anybody dumb enough to believe that I would say something inappropriate with a foreign leader while on such a potentially “heavily populated” call. I would only do what is right anyway, and only do good for the USA!

The president then wrote in a separate post, “Presidential Harassment!”

The whistleblower complaint is at the center of a confrontation between acting Director of National Intelligence (DNI) Joseph Maguire and the House Intelligence Committee. The committee’s chairman, Rep. Adam Schiff (D-Calif.), issued a subpoena to Maguire on Sept. 13 to produce the complaint, after Maguire repeatedly resisted Schiff’s request.

Schiff said that Intelligence Community Inspector General Michael Atkinson determined that the complaint was “credible and urgent” and “should be transmitted to Congress.”

Before the subpoena was issued, the Office of the Director of National Intelligence defended their decision to withhold the complaint in a letter, saying that it contained confidentially and potentially privileged communications by persons outside the intelligence community.

In response, Schiff said in a Sept. 13 letter accompanying the subpoena that Maguire’s failure to disclose the complaint “raises serious concerns about whether White House, Department of Justice, or other executive branch officials are trying to prevent a legitimate whistleblower complaint from reaching its intended recipient, the Congress, in order to cover up serious misconduct.”

The general counsel for the Office of the Director of National Intelligence, Jason Klitenic, responded to the subpoena on Sept. 17, reiterating that the agency’s refusal to hand over the complaint is to protect the whistleblower. The agency argued that the allegations in the complaint didn’t meet the definition of “urgent concern,” since that requires allegations involving “the funding, administration, or operation of an intelligence activity within the responsibility and authority” of the DNI.

Klitenic said the complaint “concerned conduct from someone outside the intelligence community and did not relate to ‘intelligence activity’ under the DNI’s supervision.”

On Sept. 18, the two sides appear to have reached a compromise, with Schiff announcing that Maguire had agreed to testify publicly on Sept. 26.

“The Committee places the highest importance on the protection of whistleblowers and their complaints to Congress,” Schiff said.

Meanwhile, Atkinson testified behind closed doors to the House Intelligence Committee on Sept. 19, but according to The Associated Press, which cited two sources who spoke on condition of anonymity, the inspector general didn’t disclose the substance of the complaint to lawmakers. The sources told AP that the meeting involved a discussion about the process for whistleblower complaints.

Speaking to reporters after the testimony, Schiff said he’s concerned that Congress couldn’t obtain the information, adding that what his committee is trying to do is to validate the whistleblower process.

“What’s at stake here goes well beyond this complaint and this president to whether any oversight is possible, any whistleblower is protected,” he said. “And we’re determined to validate that authority of the Congress.”