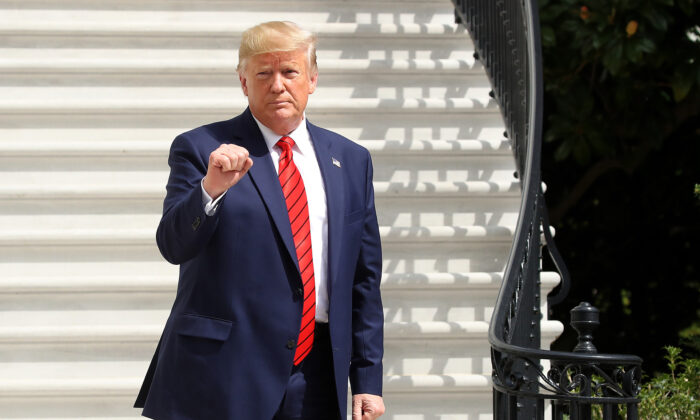 Trump: Democrats ‘Are Trying to Stop Me, Because I Am Fighting for You’

President Donald Trump has expressed his resolve to fight for the American people in a video message, following a whistleblower complaint about a phone call between Trump and Ukraine’s president that prompted the House to launch an impeachment inquiry.

“What’s going on now is the single greatest scam in the history of American politics,” Trump said in his video on Sept. 28.

“We are fighting to drain the swamp. And that’s exactly what I’m doing and you see why we have to do it because our country is at stake like never before. It’s all very simple. They’re trying to stop me because I’m fighting for you. And I’ll never let that happen.”

They are trying to stop ME, because I am fighting for YOU! pic.twitter.com/xiw4jtjkNl

House Democrats are moving forward with an impeachment inquiry announced by House Speaker Nancy Pelosi (D-Calif.) on Sept. 24. On Sept. 27, three House committees announced that one of the panels has issued a subpoena to Secretary of State Mike Pompeo over documents relating to Ukraine dealings, as well as scheduled depositions of five State Department officials as part of the inquiry.

Pelosi initiated the impeachment inquiry over media reports about a whistleblower complaint that centers on a phone call between Trump and Ukraine’s Volodymyr Zelensky. The transcript of the call and complaint were released this week.

House Republican leaders have criticized Pelosi for making the decision to start the inquiry prior to reviewing the documents. The transcript revealed that although Trump had asked Zelensky to look into Biden, he didn’t exert any pressure and neither was there any quid pro quo.

“Can you imagine if these Do Nothing Democrat Savages, people like Nadler, Schiff, AOC Plus 3, and many more, had a Republican Party who would have done to Obama what the Do Nothings are doing to me,” he wrote.

Can you imagine if these Do Nothing Democrat Savages, people like Nadler, Schiff, AOC Plus 3, and many more, had a Republican Party who would have done to Obama what the Do Nothings are doing to me. Oh well, maybe next time!

Trump and other critics have suggested that the impeachment inquiry would distract the House from its legislative agenda in Congress.

On Sept. 25, at the United Nations, Trump told reporters that he tried talking to Pelosi about gun laws but said she didn’t appear interested.

“She’s lost her way. She’s been taken over by the radical left.  She may be a radical left herself, but she really has lost her way. I spoke to her about guns yesterday. She didn’t even know what I was talking about. She’s not interested in guns,” Trump said.

“I’ll tell you what: Nancy Pelosi is not interested in guns and gun protection and gun safety. All she is thinking about is this. She’s been taken over by the radical left, the whole Democrat Party. And you take a look at what’s happening in the media today. The whole party is taken over by the left.”

Similarly, Rep. Jeff Van Drew (D-N.J.) said that compared to the last session, he feels that fewer bills are being passed now, and Congress “seldom” comes together to get things done.

“I think probably only a third of the number of bills compared to [the] last session,” he told Fox News in an appearance on Sept. 28.

“We continue to move forward on meeting the needs of the American people and making progress for them,” Pelosi said. “At the same time, we take an oath to protect and defend the constitution. We can do both.”