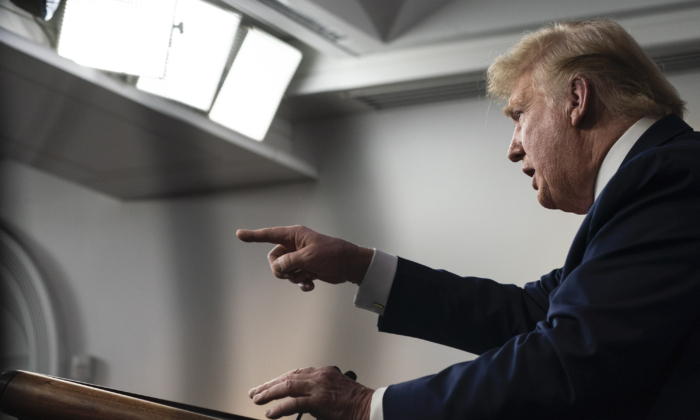 President Donald Trump on April 4 defended his decision to fire Intelligence Community Inspector General Michael Atkinson, telling reporters at the White House that Atkinson mishandled the whistleblower complaint that led to the first partisan impeachment of a president and his subsequent acquittal.

“He’s a total disgrace,” Trump said. “That’s my decision. I have the absolute right.”

The president noted that the anonymous whistleblower’s complaint didn’t have to be rushed and that Atkinson himself determined that there were indications of political bias by the complainant.

In a letter to the Senate Intelligence Committee on April 3, Trump said that he would remove Atkinson from office “effective 30 days from today.”

“As is the case with regard to other positions where I, as president, have the power of appointment, by and with the advice and consent of the Senate, it is vital that I have the fullest confidence in the appointees serving as inspectors general.”

“That is no longer the case with regard to this inspector general,” Trump said in the letter.

Atkinson played a central role in the genesis of the impeachment probe against Trump. He vetted the whistleblower complaint and determined that it should be forwarded to Congress as an urgent concern. The complaint centered on Trump’s call last July with Ukrainian President Volodymyr Zelensky.

Many questions remain about some controversial aspects of Atkinson’s involvement. Shortly after the submission of the Ukraine complaint, the intelligence community inspector general’s (ICIG) office altered its whistleblower complaint form to remove instructions that directed complainants that the office would only review firsthand information. The impeachment whistleblower’s complaint consisted almost entirely of secondhand claims.

The whistleblower also falsely claimed on the complaint form that he or she hadn’t spoken to Congress about the matter.

Atkinson testified before the House Intelligence Committee during its impeachment inquiry. His testimony is the only one that remains classified and was never released by the Democrat-controlled committee. House Intelligence Committee Chairman Adam Schiff (D-Calif.) later revealed that his office had in fact communicated with the whistleblower prior to the submission of the complaint.

Schiff, the leader of the impeachment inquiry and trial, defended Atkinson on Twitter.

“Actually, he abided by the law and the complaint was spot on,” Schiff wrote on Twitter. “Someone who follows the law and their conscience is no disgrace.”

“Of course Adam Schiff is complaining about ICIG Atkinson being fired. He was Schiff’s key impeachment enabler,” Rep. Jim Jordan (R-Ohio) wrote on Twitter, pointing out that Atkinson allegedly “let the whistleblower lie about meeting with Schiff’s staff” and “didn’t disclose the fact that the [whistleblower] worked for [Joe] Biden.”

During his July 25, 2019, call with Zelensky, Trump asked the Ukrainian leader to “look into” the firing of Ukraine’s top prosecutor, Viktor Shokin. Shortly before his forced ouster, Shokin’s office seized the assets of Mykola Zlochevsky, the owner of Ukrainian gas giant Burisma. Biden’s son, Hunter Biden, held a paid position on the board of Burisma at the time of Shokin’s firing. In sworn testimony, Shokin said that he was fired under pressure from Joe Biden because Shokin’s office was going after Burisma.

Joe Biden has publicly bragged about forcing Shokin’s ouster by withholding $1 billion in loan guarantees from Ukraine. The Biden’s have denied any wrongdoing. The younger Biden eventually stepped down from the board of Burisma.