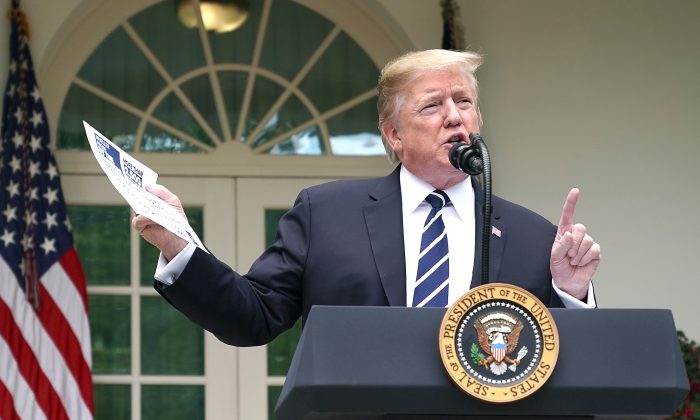 President Donald Trump in the Rose Garden at the White House on May 22, 2019. (Chip Somodevilla/Getty Images)
Trump Administration

President Donald Trump suspended bipartisan legislative efforts with the Democrats on May 22 until the Democrats terminate an onslaught of investigations targeting the White House.

Trump made the announcement after House Speaker Nancy Pelosi (D-Calif.) accused him of engaging in a “cover-up” shortly before arriving at the White House with Senate Minority Leader Chuck Schumer (D-N.Y.) to speak with Trump about a bipartisan effort to secure funding for infrastructure.

Pelosi levied the “cover-up” accusation after meeting with House Democrats amid pressure to begin impeachment proceedings against the president.

“We’re going to go down one track at a time,” Trump said at a press conference in the Rose Garden at the White House on May 22.

The president described the two tracks as “investigations” and “investment” and called on Democrats to “get these phony investigations over with.”

Pelosi, speaking to reporters after the special impeachment session, said that “we believe the president of the United States is engaged in a cover-up,” referring to resistance from the White House to several Democrat-led inquiries in the House of Representatives.

Trump pointed to the immense scale of the special counsel investigation led by Robert Mueller. The special counsel concluded there is no evidence to establish that Trump colluded with Russia. Mueller also decided against charging the president with obstruction of justice.

The day prior to the meeting with Pelosi and Schumer, Trump wrote the two Democrats a letter saying that any deal on infrastructure would have to wait until Congress moves to approve the United States–Mexico–Canada Agreement (USMCA), the Trump administration’s pact replacing the North American Free Trade Agreement (NAFTA).

“Before we get to infrastructure, it is my view that we should pass the important and popular USMCA deal,” Trump wrote. “It will replace the job-killing NAFTA, one of the worst trade deals ever entered into by our Nation.”

Trump didn’t mention the USMCA during the Rose Garden announcement. The trade pact has to be ratified by Congress.

“For some reason, maybe it was lack of confidence on his part, that he really couldn’t match the greatness of the challenge that we have, wasn’t really respectful of Congress and the White House working together,” Pelosi said at a press conference after Trump’s announcement. “He just took a pass.”

Several House committees ramped up their inquiries into Trump after Mueller’s report became public. Trump holds that the Democrat-led investigations are an attempt at a “do-over” of the two-year special counsel probe after it found no evidence of wrongdoing by the president. The president’s administration is actively resisting the inquiries, invoking executive privilege to shield redactions in the Mueller report and telling former staff to defy testimony requests and fighting them in courts.

The day before Trump cut off the infrastructure talks, former White House counsel Don McGahn defied a House Judiciary Committee subpoena seeking his testimony. Attorney General William Barr also snubbed a committee request to testify. The Democrats responded by voting to recommend that the full House hold Barr in contempt. The Democrats are calling the stonewalling a “cover-up.”

“I don’t do cover-ups,” Trump said during the Rose Garden announcement.

While Pelosi opposes impeachment, a small group of Democrats sees stonewalling by the White House as a justification to begin impeachment proceedings. The list of Democrats openly calling for impeachment grew to 30 lawmakers on May 22, according to a list compiled by The Hill.

“So sad that Nancy Pelosi and Chuck Schumer will never be able to see or understand the great promise of our Country,” Trump wrote on Twitter, after Pelosi responded to his announcement.

“They can continue the Witch Hunt which has already cost $40M and been a tremendous waste of time and energy for everyone in America, or get back to work. But they really want a do-over! You can’t investigate and legislate simultaneously – it just doesn’t work that way,” he added.

“Democrat leadership is tearing the United States apart, but I will continue to set records for the American People.”