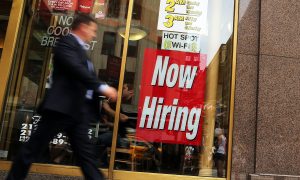 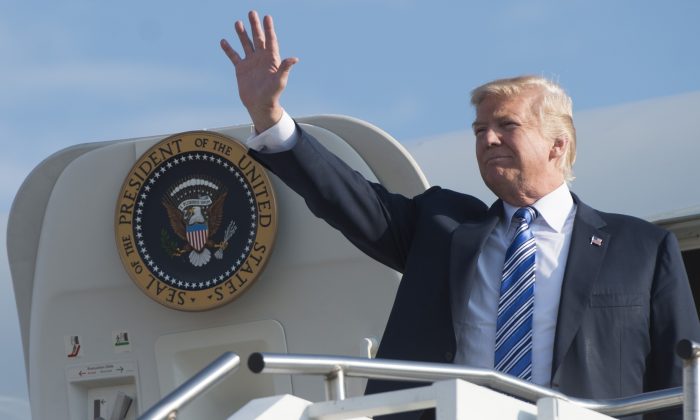 President Donald Trump disembarks from Air Force One upon arrival at Tri-State Airport in Huntington, West Virginia as he travels to a Make America Great Again Rally on Aug. 3, 2017. (SAUL LOEB/AFP/Getty Images)
Politics

President Donald Trump has slashed 10,700 government jobs in the first six months of his presidency, according to a report by GovExec.

The latest job figures, based on the July jobs report, back up Trump’s promise to clean up government bureaucracy in Washington. The numbers also reverse a two year trend of expansion throughout the executive branch.

The total number people employed in non-postal federal agencies shrunk to 2,188,900 workers in the latest report by the Bureau of Labor Statistics released on Friday.

Federal agencies have not reduced jobs on such a large scale since 2013. At the time, nearly 57,000 jobs were slashed in response to sequestration triggered by the 2011 Budget Control Act signed by then-President Barack Obama. It was the single largest drop in federal federal jobs since 1997.

Trump moved quickly to deliver on his campaign promise to shrink the federal government workforce by issuing an executive order calling on federal agencies to come up with short- and long-term plans to cut workers.

The president instructed departments to turn in draft plans by June 30. Those plans required the leaders to detail what steps have already been taken to trim the workforce.

Trump has reversed the trend of hiring sprees that his two predecessors, Obama and George Bush, set. Obama brought in 60,000 federal workers in his first six months and Bush more than 36,000.

Trump issued additional guidance to federal agencies through the Office of Management and Budget. The agencies are required to deliver a final civilian workforce reduction plan by Sept. 30. Those plans will be included in the office’s 2019 budget proposal.

Meanwhile, some agencies are already using incentives to get employees to leave.

Trump’s overall plan called for a net reduction of 1,000 jobs for fiscal year 2018, since job reductions in bureaucratic agencies were set to be replaced with gains in the departments of Defense, Homeland Security, and Veterans Affairs.

Back in 2016, Obama expressed doubt that so many jobs could be brought back.

“Some of those jobs of the past are just not going to come back,” Obama said during a town hall in Elkhart, Indiana, broadcast on PBS. “There’s no answer to it. He just says, ‘Well, I’m going to negotiate a better deal.’ Well, how exactly are you going to negotiate that? What magic wand do you have?” Obama asked.

The reductions in the federal workforce accompanies a net gain of more than one million jobs nationwide since Trump took office.

Taiwanese electronics manufacturer Foxconn announced plans for two plants in the United States—one in Wisconsin and one in Michigan.

“In May, the unemployment rate hit a 16-year low. And last quarter, real GDP growth increased to 2.6 percent,” Trump said in a weekly address on July 4.

“Prosperity is coming back to our shores because we’re putting American workers and families first.”