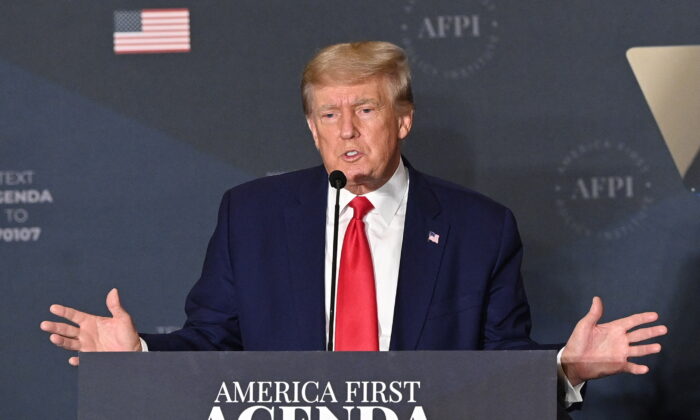 Former President Donald Trump chided Washington, D.C. Mayor Muriel Bowser after she requested that the National Guard be mobilized to deal with the influx of illegal immigrants being transported from southern states.

“The Mayor of Washington, D.C., wants the National Guard to help with the thousands of Illegal Immigrants, coming from the insane Open Border, that are flooding the City, but refused National Guard help when it came to providing Security at the Capitol Building for a far larger crowd on January 6th,” Trump wrote on his Truth Social account on July 29.

“Figure that one out?” Trump asked.

Bowser’s government has sent two separate letters to the White House and the Pentagon seeking federal help, describing the situation at the nation’s capital as a “humanitarian crisis.” In one of the letters, Bowser added that the arriving immigrants had brought her city to a “tipping point.”

Bowser, a Democrat, blamed Arizona and Texas in the other letter, saying the migrant crisis is “cruel political gamesmanship from the Governors of Texas and Arizona.”

The D.C. mayor has also claimed that immigrants are “being tricked” into opting to take buses to the nation’s capital.

Since then, Washington has received some 6,100 immigrants on 155 buses, Stars and Stripes reported on July 28, citing data from Abbott’s office.

Responding to Bowser’s request for the National Guard, Abbott wrote on Twitter that the problem that D.C. is experiencing is small compared to what Texas has been dealing with.

“D.C. is experiencing a fraction of the disastrous impact the border crisis has caused Texas,” Abbot stated. “Mayor Bowser should stop attacking Texas for securing the border & demand Joe Biden do his job.”

Two GOP lawmakers also suggested that Bowser should take up her troubles with Biden.

“Mayor Bowser now understands what it feels like to be a border state. How do you think folks in Texas feel?” Rep. Randy Weber (R-Texas) wrote in a post.

Weber added, “She should knock on Biden’s door and tell him that there is a crisis at our southern border and every state is a border state.”

“Mayor Bowser should call the White House instead and tell them to secure the southern border,” Rep. Fred Keller (R-Pa.) wrote on Twitter.

On July 29, Abbott’s office released a press release detailing what it had accomplished with the state’s Operation Lone Star, a program launched in March 2021 to prevent criminal activity along the border, including drug smuggling and human trafficking.

“Since the launch of Operation Lone Star, the multi-agency effort has led to more than 287,000 migrant apprehensions and more than 17,700 criminal arrests, with more than 15,100 felony charges reported,” the press release stated.

“In the fight against fentanyl, DPS [Texas Department of Public Safety] has seized over 325 million lethal doses throughout the state,” it added.

“Operation Lone Star continues to fill the dangerous gaps left by the Biden Administration’s refusal to secure the border,” it stated. “Every individual who is apprehended or arrested and every ounce of drugs seized would have otherwise made their way into communities across Texas and the nation due to President Biden’s open border policies.”