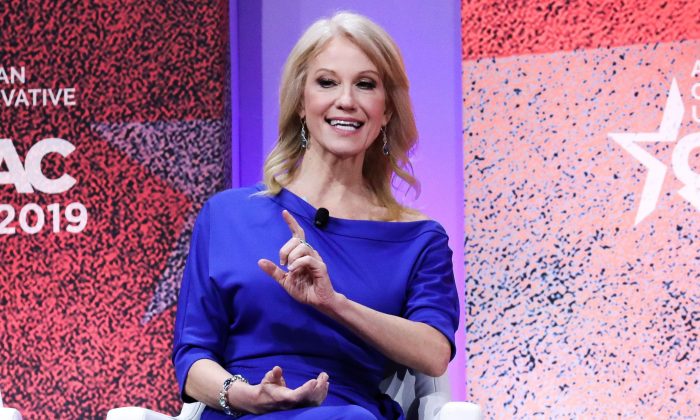 Kellyanne Conway, counselor to President Donald Trump, called on Rep. Adam Schiff (D-Calif.) to resign in light of Special Counsel Robert Mueller’s conclusion of his investigation, which found no collusion between Trump or his campaign and the Russian state to sway the 2016 election. Schiff has been a mainstay on left-leaning media outlets pushing the collusion conspiracy, repeatedly claiming to have evidence of it.

“You, in fact, running around, jutting your jaw out and saying, ‘I’m worried about the effect on the institutions,’ you were disparaging the institutions, you were demeaning and deriding our great democracy, the presidency of the United States,” Conway told Fox News, referring to Schiff.

After a nearly two-year-long investigation, Mueller submitted his final report to Attorney General William Barr on March 22. The report has completely exonerated Trump and those connected to his campaign of all allegations of collusion with Russia, according to a summary of investigative findings issued by Barr on March 24.

Mueller referred several cases to other offices of the Justice Department, but will not issue any more indictments, Barr wrote in the 4-page summary (pdf).

Schiff was still doubling down on March 24, telling ABC’s “This Week” that “significant evidence of collusion” exists.

“There’s a difference between compelling evidence of collusion and whether the special counsel concludes that he can prove beyond a reasonable doubt the criminal charge of conspiracy,” he said.

On Feb. 16, 2018, Mueller indicted 13 people and three companies that allegedly ran a Russian campaign mainly through social media intending to “spread distrust towards the candidates and the political system in general,” before and during the 2016 U.S. presidential election.

The defendants could have simply avoided coming to the United States and thus never face trial. But one of the defendants, a Russian company named Concord Management and Consulting, volunteered to stand trial.

Magistrate Judge Michael Harvey asked if the defense also represented Concord Catering, another company that Mueller charged and alleged is associated with Concord Management and Consulting. But one of the defense lawyers told the judge they’re not representing it, because Concord Catering “didn’t exist as a legal entity during the time period alleged by the government.”

“I think we’re dealing with a situation of the government having indicted the proverbial ham sandwich,” the lawyer said.

The ham sandwich reference dates back to 1985, when New York Chief Judge Sol Wachtler told the New York Daily News that government prosecutors have so much power over grand juries, they can make them indict, in a sense, just about anybody—or anything.