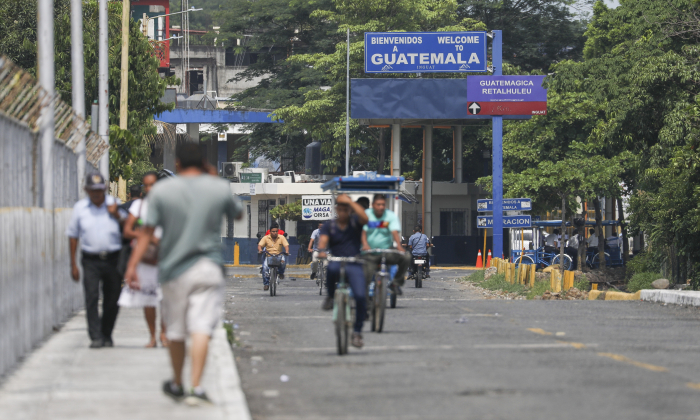 President Donald Trump is considering options to punish Guatemala for walking away from a “safe third country” agreement, including a travel ban, tariffs, and a hike in remittance fees.

“Guatemala, which has been forming Caravans and sending large numbers of people, some with criminal records, to the United States, has decided to break the deal they had with us on signing a necessary Safe Third Agreement,” Trump wrote on Twitter on July 23. “We were ready to go. Now we are looking at the ‘BAN,’ Tariffs, Remittance Fees, or all of the above. Guatemala has not been good. Big U.S. taxpayer dollars going to them was cut off by me 9 months ago.

Guatemala President Jimmy Morales canceled a trip to Washington on July 14 that would have included negotiations for a safe third country. The agreement would require migrants from El Salvador and Honduras to seek asylum in Guatemala and allow the United States to deport migrants from those countries to Guatemala as they await a resolution of their asylum claims.

The day before Trump’s announcement, the Department of Homeland Security released a joint statement with Guatemala that highlighted several areas of cooperation between the two countries, but notably omitted any mention of the safe third country deal.

On the campaign trail, Trump pitched a plan (pdf) to pressure Mexico to pay for a wall on the southwest border by threatening to enact a rule that would prohibit illegal aliens in the United States from sending money internationally.

The president has already used the threat of tariffs to force Mexico to step up its immigration enforcement efforts. The United States is one of Guatemala’s largest trading partners, according to the Department of State.

The president’s reference to a “ban” is least clear of the three options he listed, but likely refers to a travel restriction on Guatemalan citizens. Trump has previously banned travel from several nations with high concentrations of terrorists. The Supreme Court upheld a version of the order in June last year.

The State Department is following through on an order from Trump and cutting $550 million in aid to Guatemala, El Salvador, and Honduras, also known as the Northern Triangle.

Secretary of State Mike Pompeo said in an interview on July 22 that the United States has broadened its economic engagement with the Northern Triangle, noting that in addition to direct migration from the three countries, many of the migrants who arrive on the U.S. border transit through the area.