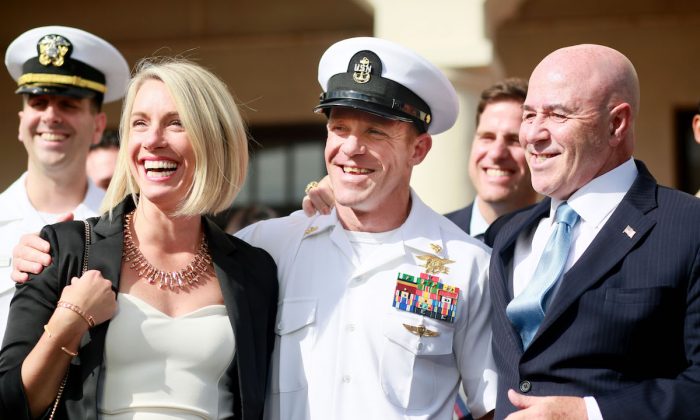 Navy Special Operations Chief Edward Gallagher, center, and his wife Andrea, left, celebrate after being acquitted of all but one charge in San Diego, Calif., on July 2, 2019. (Sandy Huffaker/Getty Images)
US News

“Congratulations to Navy Seal Eddie Gallagher, his wonderful wife Andrea, and his entire family,” Trump wrote in a missive on Twitter on July 3.

“You have been through much together. Glad I could help!”

Congratulations to Navy Seal Eddie Gallagher, his wonderful wife Andrea, and his entire family. You have been through much together. Glad I could help!

A military jury in California on July 2 found Gallagher not guilty of murdering an ISIS prisoner. Gallagher had been accused of killing the prisoner, who was wounded by an airstrike.

The jury found Gallagher not guilty of all counts except for the violation of posing for photographs with a dead war casualty. According to one of Gallagher’s attorney, Tim Parlatore, the entire platoon was in the photos, but Gallagher was the only one charged. While Gallagher could be sentenced to up to four months in prison for that conviction, he could also be given credit for the more than six months he served while in jail.

The case came under fire after a judge found prosecutorial misconduct, and it was upended on June 20 when a witness in the trial admitted to killing the wounded prisoner. “Fox & Friends” on Wednesday asked Gallagher how he handled fellow SEALS testifying against him. After an audio mishap, Parlatore stepped in to answer.

“Seal teams are a famously close brotherhood and yet what you’ve seen today is, with a lot of these teams, there’s a certain generation of SEALS that don’t really fit into that traditional notion of brotherhood,” he said, alluding to “certain periods of time when they relaxed standards and had a large influx of people into the community.” He said that “they weren’t up to Eddie Gallagher’s standards.”

Trump intervened in Gallagher’s incarceration earlier this year, saying that he was being moved to “less restrictive confinement” in honor of his past service.

After the acquittal on Tuesday, Gallagher cried tears of “joy” and “freedom,” attorney Marc Mukasey, part of his team, said.

Friends of Gallagher emerged from the San Diego courthouse and yelled “Free Eddie” while his attorneys high-fived each other.

Gallagher told Fox that he thinks he was the victim of a framing attempt.

“I believe they tried to frame me as a criminal from the get-go. But we knew the truth the whole time. We knew I was innocent of these charges. I overcame it by having my strong wife with me the whole time and my legal team fighting for me,” the 40-year-old said.

Of the members of his platoon who testified against him, Gallagher said at one point that they don’t represent SEALs as a whole.

“This small group of SEALS that decided to concoct this story in no way, shape, or form represent the community that I loved and gave my soul to,” he said.

“This has put a black eye on [the SEAL] community. I want the nation to know this is not what our community is about. This community is full of elite warriors that I have been honored and blessed to work with for the past 20 years,” he said.

His wife said she was pleased with the verdict.

“Now everyone in the country is able to see what we’ve seen all along: my husband is a hero,” she said.