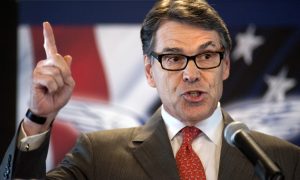 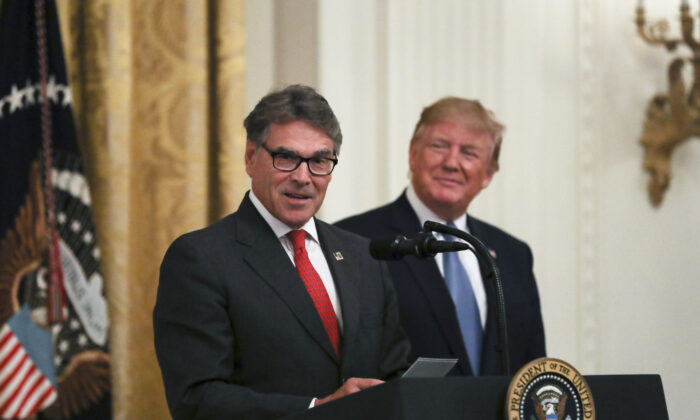 President Donald Trump confirmed late Thursday that Energy Secretary Rick Perry has resigned, and will be leaving towards the end of the year.

“Rick has done a fantastic job at Energy. But it was time, three years is a long time,” Trump told reporters in Texas, adding that he was not surprised when asked about Perry’s resignation.

“No I knew six months ago,” Trump said. “He told me at the end of the year he’d like to go and he’s got some ideas about doing something else. He’s a terrific guy.”

“Rick and I have been talking for six months. In fact, I thought he might go a bit sooner,” Trump added. “But he’s got some very big plans. He’s going to be very successful. We have his successor we’ll announce it pretty soon.”

Perry posted to Twitter Thursday night a video titled “The Coolest Job I’ve Ever Had,” with an accompanying message that said that serving in his role as Secretary of Energy under Trump has been “the honor of a lifetime.”

“Serving as Secretary of @ENERGY under @realDonaldTrump has been the honor of a lifetime. Today the U.S. leads the world in energy production, we launched AI & Cyber Security Offices, & made environmental progress unseen for decades cleaning up the legacy of the Manhattan Project,” he wrote in his Twitter post.

“I thank President Trump for giving me the opportunity of a lifetime. I am so glad that I said yes,” he also wrote.

Serving as Secretary of @ENERGY under @realDonaldTrump has been the honor of a lifetime. Today the U.S. leads the world in energy production, we launched AI & Cyber Security Offices, & made environmental progress unseen for decades cleaning up the legacy of the Manhattan Project. pic.twitter.com/ZWZer3yMHy

In his position, Perry helped seal a deal to sell U.S. coal to Ukraine and had worked with the country and others on providing Europe an alternative to its dependence on gas from Russia. Perry talked up shipments of U.S. liquefied natural gas as “freedom gas” for Eastern Europe.

The Energy Department issued seven licenses to companies to share information on nuclear power with Riyadh, which plans to issue a multibillion-dollar tender for the nuclear plants in 2020.

Perry had also advocated for maximum pressure on Iran over its nuclear and missile programs and influence in Syria and Iraq.

The confirmation of Perry’s resignation comes a day before a deadline that House Democrats had set for him to submit documents in an impeachment inquiry Democrats are carrying out on the president.

Chairmen of the House Intelligence, Foreign Affairs and Oversight committees issued Perry a subpoena on Oct. 10 compelling him to produce documents related to a Ukrainian state-owned energy company, as well as, documents related to Perry’s possible involvement in a July phone call between Trump and Ukrainian President Volodymyr Zelensky. Perry has not been accused of any wrongdoing.

Perry was the longest-serving governor in Texas history having served for fourteen years from 2000 to 2015. He later made unsuccessful attempts to run for president in the 2012 and later in the 2016 election cycle.

When Perry was running as a Republican candidate in the 2016 election cycle, he had initially criticized Trump. However, after Perry dropped out of the race and Trump became the Republican party’s presumptive nominee, he started to endorse Trump.

“He is not a perfect man. But what I do believe is that he loves this country and he will surround himself with capable, experienced people and he will listen to them,” Perry said in May 2016.

“He wasn’t my first choice, wasn’t my second choice, but he is the people’s choice,” Perry added.