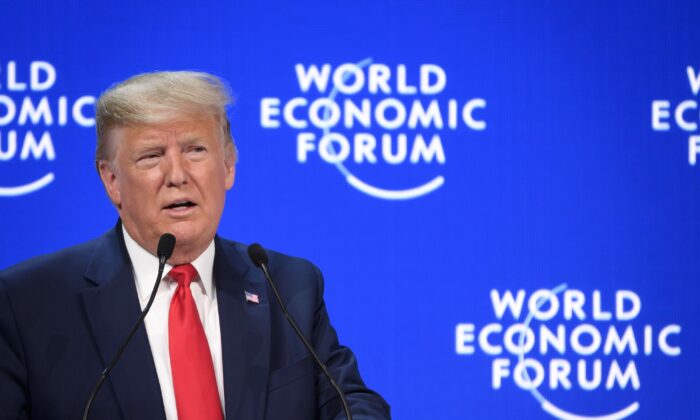 President Donald Trump delivers a speech at the Congres center during the World Economic Forum annual meeting in Davos, Switzerland, on Jan. 21, 2020. (Fabrice Coffrini/AFP via Getty Images)
By Tom Ozimek

President Donald Trump told reporters in Davos he is confident in striking a trade deal with Europe as the threat of tariffs looms large.

“We’re going to make a deal I suspect, otherwise we’ll have to do something else,” Trump told a news conference at the World Economic Forum in Switzerland on Wednesday.

“They have no choice,” Trump said in a separate interview, underscoring his conviction that a deal between the United States and its biggest import trading partner will end up signed.

A day earlier, Trump said that unless a “fair deal” is negotiated with the EU, he would impose tariffs on U.S. imports of European cars.

“They know that I’m going to put tariffs on them if they don’t make a deal that’s a fair deal,” Trump told The Wall Street Journal in Davos on Jan. 21, referring to automobiles, the bloc’s key export.

While Trump has not specified when he would greenlight fresh tariffs on cars, the Financial Times reported it would be before the November elections.

“I have a date in my mind, it is a fairly quick date,” he said, according to the FT.

During a Jan. 21 meeting with European Commission President Ursula von der Leyen, Trump talked up the prospects of a deal, while acknowledging obstacles.

“It’s great to be with the president of the European Commission and a woman who’s highly respected, I have to say, and I hear a very tough negotiator, which is bad news for us because we’re going to talk about a big trade deal, and we’ve been talking about it for a while, and hopefully we can get something done,” Trump said.

Touting the long-standing relationship between Europe and the United States, Von der Leyen struck a similarly hopeful note, but noted there were unresolved matters still to be ironed out.

“The American people and the European people are good friends,” Von der Leyen said. “And this is what we’re going to build on, and indeed, we have issues to discuss, and we’re going to negotiate. But I’m looking forward to this relationship.”

‘Tariffs All Over the Place’

Trump has complained the bilateral trade relationship is skewed to America’s detriment.

“They have trade barriers where you cannot trade, they have tariffs all over the place. They make it impossible,” Trump told reporters in Davos on Wednesday.

U.S. trade with the EU totaled nearly $1.3 trillion in 2018, with a $109 billion deficit, according to statistics from the office of the United States Trade Representative (USTR). Machinery ($80.2 billion), pharmaceuticals ($71.9 billion), and vehicles ($56.4 billion) ranked as the top three import categories.

“Despite this significant trade volume, U.S. exporters in key sectors have been challenged by multiple tariff and non-tariff barriers for decades, leading to chronic U.S. trade imbalances with the EU,” states a Summary of Specific Negotiating Objectives (pdf), published last year by the United States Trade Representative.

The Trump administration launched a “Section 232” probe of foreign autos in May 2018, after which Trump agreed with conclusions that some imported vehicles and components are “weakening our internal economy” and could harm national security.

As U.S.-EU trade negotiations have made little progress over the past year, the White House has repeatedly threatened to slap tariffs on Europe, but in each case has delayed action.

In November, the Trump administration let a deadline lapse on tariffs of as much as 25 percent on vehicles and parts imported from the EU.

“The good news is that the U.S. did not announce any new tariffs on EU cars or car parts,” European Trade Commissioner Cecilia Malmstrom said in Brussels on Nov. 21, according to the Chicago Automobile Trade Association. “Of course the threat is not entirely gone, and we are mindful of that.”

Amid the ongoing trade dispute, the White House imposed tariffs on $7.5 billion of EU goods in October over illegal aircraft subsidies.

“Our brand-new USMCA is the result of the broadest coalition ever assembled for a trade agreement,” Trump said, referring to the United States-Mexico-Canada deal that superseded NAFTA.

“Manufacturing, agriculture, and labor all strongly endorsed the deal,” Trump said. “And, as you know, it just passed in Congress overwhelmingly. It shows how to solve the 21st century challenge we all face: protecting intellectual property, expanding digital trade, re-shoring lost jobs, and ensuring rising wages and living standards.”

The president said the United States had struck a $40 billion deal with Japan and renegotiated a trade agreement with South Korea.

“We’re also negotiating many other transactions with many other countries,” Trump said, including “a tremendous new deal with the United Kingdom.”

Trump told The Wall Street Journal Tuesday that he and French President Emmanuel Macron agreed to postpone a digital services tax that was supposed to hit American tech firms sometime in 2020.

The president told the newspaper he threatened to impose a tariff of 100 percent on French wine, which currently faces an import duty of 25 percent in relation to a separate trade dispute involving European aviation giant Airbus.

The economic summit in the Swiss Alpine town runs through to Jan. 24.

The high-profile forum brings together world leaders, business elites, economists, and celebrities from around the globe.