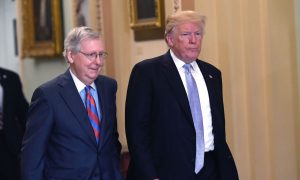 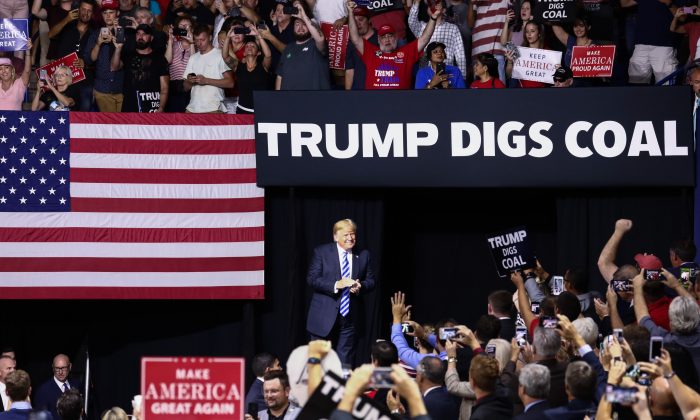 CHARLESTON, W.Va.—For West Virginians, it’s all about energy, and they brought a lot of it to the Make America Great Again rally in Charleston on Aug. 21.

The state is the second-largest coal producer (after Wyoming) in the country, and President Donald Trump is credited for the resurgence that is underway in the industry.

Prime seats were reserved for a group of miners at the rally, and Trump spoke directly to them on several occasions.

“We are putting our great coal miners back to work,” Trump said to roaring applause. “We love clean, beautiful West Virginia coal. We love it.

T.J. Blevins, 41, said he was almost forced to close the doors on his company during the Obama era.

He owns American Mine Services, which supplies mining companies with equipment such as augers and drill bits. His father founded the company about three decades ago; now, T.J. runs it.

“The eight years of the Obama administration nearly shut the doors,” Blevins said. “We are one of the very few successful businesses in our area, and we just about closed the doors.”

Blevins’s company operates in Man, West Virginia, which has a population of 683, according to the Census Bureau in 2016.

“As soon as they elected Trump, we started getting calls. … They knew they were going back to work,” Blevins said. “And it was almost immediately when he took over in January, we took back off. And we’re back up to 13 employees now.”

Blevins said the steel mills, coal mines, and deep mines are all seeing a resurgence.

“We’re back to booming again, I mean we’re knocking down,” he said. He attributes the new boom to Trump lifting Environment Protection Agency (EPA) restrictions.

“I live about 35 feet from a railroad track, I’ve lived here all my life. When Obama took over, I thought there’d never be another train come through there, that’s how bad it was,” Blevins said. “Now, there’s at least 30 trains a month coming up and down. It went from one to two to every bit of 30. It’s a good swing.”

Blevins is optimistic about the future “as long as we don’t get another Democrat against coal” as president.

He said he does some business in a strip mine that is guaranteed work for the next 30-some years. A company near his house has two deep mines and is preparing to open a third early next year.

According to an aggregation of polls, Real Clear Politics puts Manchin up by seven points over Morrisey as of Aug. 16. However, Trump’s endorsements have lifted other candidates from behind recently and may give Morrisey the boost he needs.

“Joe has got to go,” said Morrisey. “Donald Trump and I are fighting every day for our coal miners and the hard-working men and women of our state. He’s trying to get the man off your back and I’m working every day to help him do it.”

Earlier in the day, the administration rolled out its Affordable Clean Energy plan, which would replace the Obama administration’s Clean Power Plan. The new plan scraps restrictions aimed at eliminating coal as an energy source and moves regulatory power to the states.

“[The plan] will help our coal-fired power plants and save consumers—you, me, everybody—billions and billions of dollars,” Trump said.

The Obama-era plan could have resulted in double-digit electricity price increases in 40 states, according to a study by the National Economic Research Associates cited by the White House.

Scott Matheny, 49, lives in Parkersburg, West Virginia, and works as an electrician in the aluminum industry.

“Our sales are strong, especially with the tariffs,” he said, adding that the tariffs Trump applied to steel and aluminum imports “are good for us.”

“You’ve got to level the playing field,” Matheny said. He said deregulation is also making a big impact on local business. “They are able to hire more; you don’t have so many penalties and paperwork. Let the free markets run.”

‘Washington Don’t Run Without Us’

Sharon Gum, 76, has lived in the same house her whole life. She said she supports Trump because he can “take care of business.”

“And we need someone with a forward look that can see the future,” she said. “Because most people before him—well, they can speak, but they can’t do policy, they can’t do business.”

Gum’s late husband used to work at one of the large plants that pushed gas to Washington and Virginia.

“It comes from here. Washington don’t run without us,” she said. “I knew that, because when the terrorist attack came, the people came to take care of the gas plants.”

She said her community “went way down” during the Obama era when the coal industry tanked, but she has noticed more people have jobs and more jobs are available since Trump took office.

I don’t know what he thought we was going to live on,” she added.

Attorney Bridget Furbee is an expert on energy law, especially gas exploration and production, for Steptoe & Johnson. She said West Virginia has been on an economic upswing since Trump took office.

“There is a bit of a resurgence with the coal industry, and certainly we’ve had a huge uptick in the natural gas exploration development and midstream operations,” Furbee said.

Policy changes and deregulation have been a “huge step forward” for the economy, she said.

Trump’s appointees to the Federal Energy Regulatory Commission (FERC) have been “helpful,” Furbee said. Three of the four current FERC commissioners joined between August and November 2017.

The commission regulates the transmission of electricity, natural gas, and oil between states; the development of liquefied natural-gas terminals and interstate natural-gas pipelines; and the licensing of hydropower projects.

However, the five-member commission currently only has four members.

“Right now, that’s a problem, because we’re at a point where we don’t have a quorum again. So, he needs to get that fixed ASAP,” Furbee said.

Dan Cooley, who attended the rally with his wife and three sons, said he has “absolutely” noticed an uptick in the local economy post-Trump.

“Coal mainly. Coal, oil, and gas are all taking a boom. They’re all on the way up right now,” he said. “[It’s] a dramatic difference.”

Cooley works in the forestry industry, which he said remains steady no matter what’s going on.

He said Trump is standing up for what “real Americans” represent.

“We love America, we love God, and [Trump’s] standing up for the real America,” he said. “He’s trying to fight all the fake news and the unpatriotic Americans that are in Hollywood. [They] need to go to another country if they don’t like it here because this is the best country on the face of the Earth.”

Kathrine Brown, 24, said the gas pipelines are helping the economy but she supports Trump because “he believes in everything I believe in.”

Brown is a medical assistant at Central Regional Jail and sees a lot of issues with opioids and especially methamphetamines.