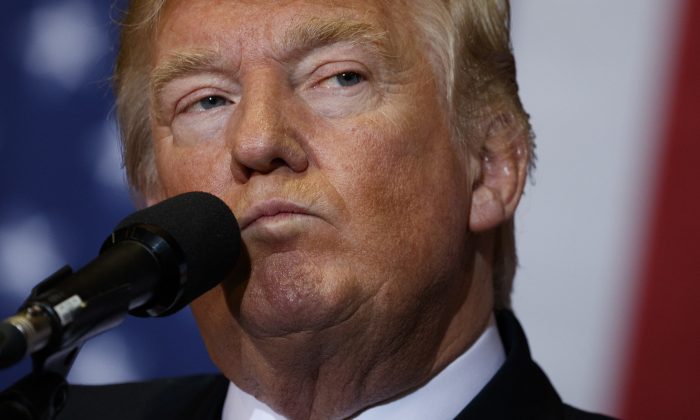 Clinton carried Virginia and Colorado, as well as California, the nation’s largest prize. With a handful of other states still undecided, neither candidate had cleared the 270 Electoral College votes needed to win the White House.

Michigan and Wisconsin, two Midwestern powerhouses that haven’t voted for a Republican presidential candidate since the 1980s, took on unexpected importance. Clinton’s campaign had largely taken both for granted, but made a late push in Michigan in the race’s final days.

The uncertainty sent Dow Jones futures and Asian markets tumbling, reflecting investor concern over what a Trump presidency might mean for the economy and trade.

As Clinton’s team anxiously waited for results to roll in, the candidate tweeted to supporters, “Whatever happens tonight, thank you for everything.”

Clinton, a fixture in American politics for decades, was hoping to become the first woman to serve as commander in chief. She faced stiff competition from Trump, the billionaire businessman who tapped into a searing strain of economic populism.

Trump picked up a number of reliably Republican states, while Clinton won in Democratic territory. But the race was to be determined by fewer than a dozen competitive states where the candidates spent millions of dollars and much of the fall wooing voters.

Exit polls underscored the deep divisions that have defined the 2016 contest. Women nationwide supported Clinton by a double-digit margin, while men were significantly more likely to back Trump. More than half of white voters backed the Republican, while nearly 9 in 10 blacks and two-thirds of Hispanics voted for the Democrat.

Democrats’ path to retaking the Senate majority narrowed as Republicans held onto key seats in North Carolina, Indiana and Florida. The GOP was on track to secure two more years of House control.

The 45th president will inherit an anxious nation, deeply divided by economic and educational opportunities, race and culture. The economy has rebounded from the depths of recession, though many Americans have yet to benefit. New terror threats from home and abroad have raised security fears.

Clinton asked voters to keep the White House in her party’s hands for a third straight term. She cast herself as heir to President Barack Obama’s legacy and pledged to make good on his unfinished agenda, including passing immigration legislation, tightening restrictions on guns and tweaking his signature health care law.

But she struggled throughout the race with persistent questions about her honesty and trustworthiness. Those troubles flared anew late in the race, when FBI Director James Comey announced a review of new emails from her tenure at the State Department. On Sunday, just two days before Election Day, Comey said there was nothing in the material to warrant criminal charges against Clinton.

Seven in 10 Americans who went to the polls Tuesday said immigrants now in the country illegally should be allowed to stay, while just a quarter said they should be deported. More than half oppose building a border wall, according to the exit polls, which were conducted for The Associated Press and television networks by Edison Research.

Most problems that did pop up at polling places Tuesday appeared to be routine—the kinds of snags that come every four years, including long lines, machines not working properly and issues with ballots or voter rolls.

“I grew up in a Hispanic family, and the way that Donald Trump has referred to illegal immigrants—being from illegal immigrants, I took that to heart,” said Angel Salazar, a 22-year-old sanitation associate from Oklahoma City. “I don’t like anything that he said. I don’t like his views. So I voted for Hillary Clinton because she supports us.”