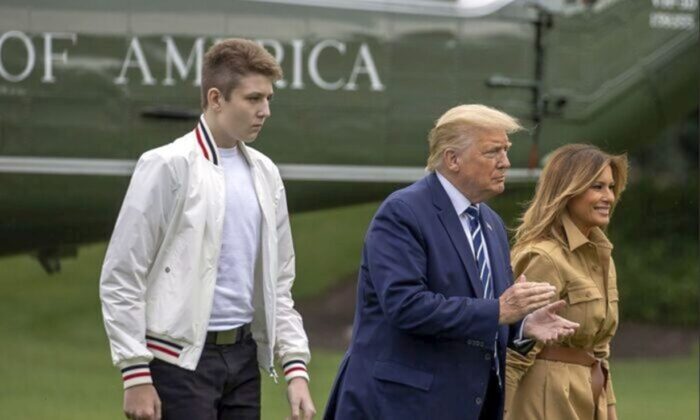 Former President Donald Trump on Saturday revealed that the FBI searched his 16-year-old son Barron’s room during the raid on Mar-a-Lago last month.

FBI agents “rifled through” former First Lady Melania Trump’s closet and “even did a deep and ugly search of the room of my 16-year-old son,” Trump told a crowd in Wilkes-Barre, Pennsylvania. He added that agents left “everything they touched in far different condition than it was when they started.”

“The Biden administration invaded the home of their chief political opponent, who is absolutely destroying him and everyone else in the polls—I hate to say it—even including the Republicans, but we love the Republicans,” Trump said, adding that raid began only after “getting permission from a highly political magistrate, who they handpicked late in the evening, just days before the break in and trampled upon my rights and civil liberties.”

The 45th president said the search was merely an attempt to meddle in the midterm elections in November 2022.

Elaborating, Trump also addressed the Department of Justice including a photo of documents that were scattered on the floor in a court filing.

“Then they put out for public consumption a picture, which is seen all over the world. This is what they do. It’s called disinformation. These are very dishonest, sick people,” he said. “Very dishonest people. Americans are sick of the lies, sick of the hoaxes and scams, and above all, sick of the hypocrisy.”

Trump spoke at the rally in Wilkes-Barre along with Republican candidates Mehmet Oz and Doug Mastriano, who are campaigning for the Senate and governor’s seat, respectively. It was his first rally since the FBI raid.

In court, Trump is seeking the appointment of a special master—or a neutral third party—to review the documents that were taken by FBI agents on Aug. 8. A search warrant and property receipt asserted that some of those documents were marked as classified, but Trump and members of his team said that he declassified the materials while he was still president.

The warrant said Trump is being investigated for possible Espionage Act and obstruction of justice charges. While the affidavit was released to the public, Republicans and Trump said that it was mostly redacted, including the reasons for why certain portions need to be redacted.

Also Saturday, Trump suggested again that he might run for president in 2024.

The DOJ has not returned a request for comment on Trump’s Saturday speech.