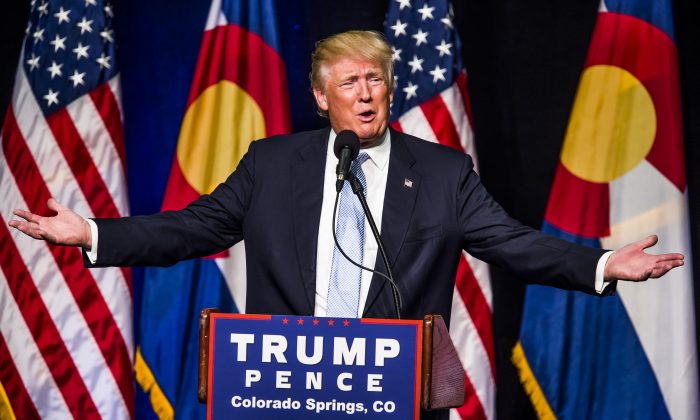 WASHINGTON  — Both the NFL and the Commission on Presidential Debates are rejecting Republican Donald Trump’s assertions about the fall debates, which the billionaire businessman says have been rigged by his opponents to draw a smaller audience by scheduling two of them at the same time as a football game.

Trump began by making an accusation in a tweet posted Friday night: “As usual, Hillary & the Dems are trying to rig the debates so 2 are up against major NFL games. Same as last time w/ Bernie. Unacceptable!”

Trump expanded his conspiracy theory when asked about the debates during an interview for Sunday’s “This Week” on ABC: “Well, I’ll tell you what I don’t like. It’s against two NFL games. I got a letter from the NFLsaying, ‘This is ridiculous. Why are the debates against’ — ’cause the NFL doesn’t wanna go against the debates. ‘Cause the debates are gonna be pretty massive, from what I understand, OK?”

Asked about Trump’s assertion, NFL spokesman Brian McCarthy tweeted on Saturday: “While we’d obviously wish the Debate Commission could find another night, we did not send a letter to Mr Trump.”

A Trump aide said Saturday that the Republican candidate “was made aware of the conflicting dates by a source close to the league.” The aide was not authorized to speak by name and requested anonymity.

“The CPD did not consult with any political parties or campaigns in making these decisions,” the commission said in a statement issued Saturday.

The Democratic Party was criticized during the primary race for scheduling debates between Clinton and Sen. Bernie Sanders on Saturday nights and holiday weekends, times when viewership is low. The Sanders campaign suggested that was an effort to limit the size of the audience.

Trump told ABC: “You know, Hillary Clinton wants to be against the NFL. She doesn’t — maybe like she did with Bernie Sanders, where they were on Saturday nights when nobody’s home.”

The Clinton campaign did not comment on Trump’s assertions.

In the ABC interview, Trump said three debates were “fine” and that he’d rather have three than one.