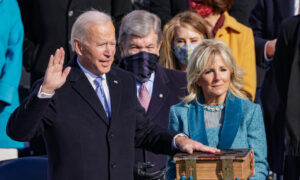 Trump Cheered by Supporters Upon Landing in Florida

President Donald Trump was greeted by a crowd of supporters in Florida on Wednesday.

Trump flew to West Palm Beach from Washington via Joint Base Andrews in Maryland.

Video footage showed scores of Trump supporters lining the streets as Trump’s motorcade traveled from the airport to his Mar-a-Lago resort.

“We just wanted to show him how much we appreciate him,” Anita Bargas, who traveled from Texas, told WLPG.

“For the most part, it’s just a somber but at the same time celebratory moment for us to welcome him back home,” Trump supporter Iam Hedendal added.

“We want to show him he’s not alone,” Daniel Rakus, a 65-year-old Palm Beach resident, told the South Florida Sun-Sentinel. “He did a great job. We support him.’”

“President Trump knows we had his back from the very beginning, and he proved that he had our back.”

Lisa Beche, 53, a Boca Raton resident, added, “He is one of the best.” She gave high marks to his presidency. “For four years, we were listened to. We were heard.”

Thomas Burgess, 35, told the Sun-Sentinel that Trump’s presidency affected him personally. He said that because of Trump’s First Step Act, he was released from prison in 2019 after serving eight years for selling crack cocaine.

Roger Stone, the former Trump adviser who received a pardon while the president was still in office, joined the crowd.

Trump waved to people as the procession of vehicles moved slowly by the crowd. The pro-Trump crowd stretched a couple of miles before the bridge onto Palm Beach Island. It was two or three deep in places.

Signs held by supporters included “Praying 4 Trump” and “Trump 4 ever my president.” One sign congratulated Tiffany Trump on her recent engagement. Signs from protesters included “You’re Fired” and “Firefighters for Biden.”

Trump was joined on the Air Force One flight from Maryland to Florida by his wife Melania Trump and his children Ivanka, Donald Jr., Eric, Tiffany, and Barron. Trump administration officials Dan Scavino and Jason Miller were also on board. The flight touched down at Palm Beach International Airport at 10:54 a.m.

Miller tweeted pictures of Trump supporters lining the road and later teased a 2024 run for Trump. Scavino shared video footage of supporters as seen from a vehicle in the motorcade.

Trump left Washington on Wednesday morning, skipping inauguration ceremonies for President Joe Biden, who was sworn in around noon. Every president in the past 100 years had attended his successor’s inauguration, according to the White House Historical Association.

Trump left a letter to Biden, which Biden described later as “very generous.”

Trump told supporters in Maryland that “we will be back in some form.” Advisers have suggested he’ll get involved in the 2022 midterm races and could run for president again in 2024.

The Democratic-controlled Senate, though, is looking to convict Trump after the House impeached him earlier this month. If they manage to convince 17 Republicans to join them, the Senate could then vote to disqualify Trump from ever holding office again.