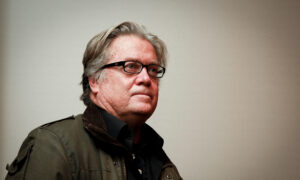 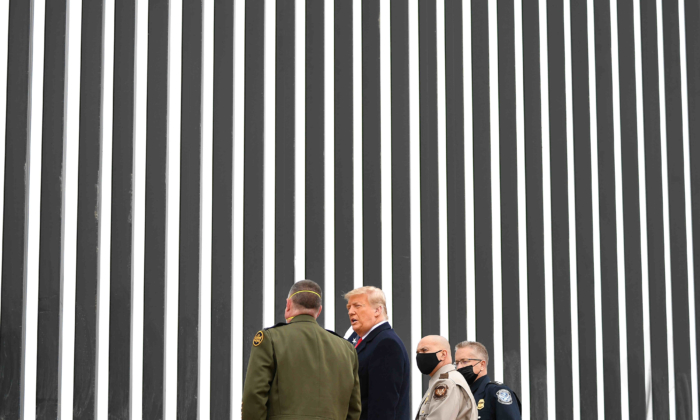 President Donald Trump traveled to the southern U.S. border on Jan. 12 to tout the successful construction of 450 miles of border wall and a number of other immigration enforcement achievements from his administration.

The president delivered a brief speech in Alamo, Texas, amid a backdrop of construction equipment and a section of the border wall. The barrier is one of the most concrete landmarks of Trump’s legacy. The president spent years bargaining and battling with Democrats to secure funding for the project amid a surge in illegal crossings over the border with Mexico.

“We worked long and hard to get this done. They said it couldn’t be done. And we got it done: one of the largest infrastructure projects in the history of our country,” the president said.

Alamo officials hadn’t received any notifications about the president’s trip, according to a statement from City Manager Bobby Salinas.

The remarks in Alamo marked Trump’s first public statement since his permanent suspension from Twitter. The social media giant severed the president’s direct line of communication with tens of millions of his followers on Jan. 8, prompting criticism from world leaders in France, Germany, Australia, and Mexico.

The company asserted that the president had incited the breach of the U.S. Capitol on Jan. 6. The president told reporters on Jan. 12 that there was nothing wrong with the speech he had given to a large crowd of supporters that day.

“I think that Big Tech is doing a horrible thing for our country and to our country. And I believe it’s going to be a catastrophic mistake for them,” Trump said before departing for Texas.

“But there’s always a counter-move when they do that. I’ve never seen such anger as I see right now, and that’s a terrible thing.”

Speaking in Alamo, the president appeared entirely unphased by the hyper-partisan fallout from the breach of the Capitol. Democrats in the U.S. Congress and some Republicans have called on him to resign from office. Democrats led by House Speaker Nancy Pelosi (D-Calif.) are seeking to impeach him, alleging that the president incited an insurrectionist mob. They are also urging Vice President Mike Pence to invoke the 25th Amendment to remove Trump from office.

“The impeachment hoax is a continuation of the greatest and most vicious witch hunt in the history of our country, and is causing tremendous anger and division and pain, far greater than most people will ever understand,” Trump said in Alamo.

“Now is the time for our nation to heal. And it’s time for peace and for calm.”

At the end of September 2020, the Department of Homeland Security stated it was on track to complete the construction of 450 miles of new border wall by the end of the year. At the time, construction was churning at 10 miles per day. A large portion of the new wall replaced existing border structures that were inadequate or broken.

The wall, combined with a series of policies, court victories, and diplomatic deals, resulted in a dramatic decrease of illegal border crossings in fiscal year 2020. Total Customs and Border Protection enforcement actions soared to more than 1.14 million in 2019 from 526,901 in 2017. In 2020, the number dipped to 646,822.

A standoff with the Democrats over funding for the wall resulted in the longest government shutdown in modern U.S. history. Spanning 35 days from the end of 2018 into the first month of 2019, the shutdown resulted in either full or partial closures of nine executive agencies with some 800,000 employees.

Trump ended the shutdown by approving a temporary spending measure for three weeks and demanded that Congress come up with a bill to fund the wall in the meantime. When Congress failed to do so, the president bypassed it by declaring a state of emergency on the border.