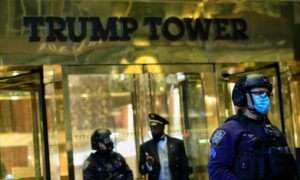 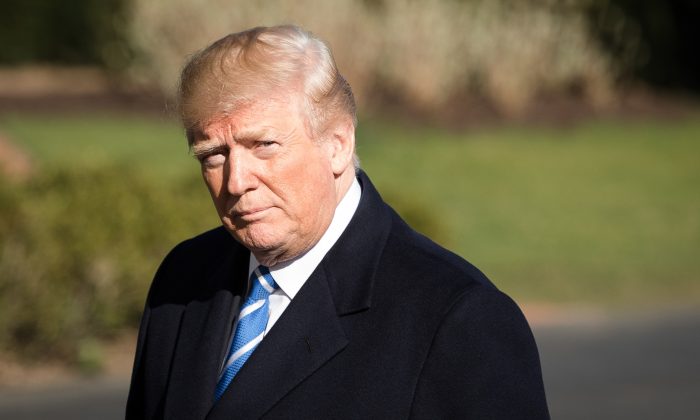 Trump Castigates NBC for Getting Story on Trump’s Lawyer Wrong

President Donald Trump rebuked NBC News after the network backpedaled a story about Trump’s lawyer that was based on anonymous sources.

“NBC NEWS is wrong again! They cite ‘sources’ which are constantly wrong. Problem is, like so many others, the sources probably don’t exist, they are fabricated, fiction! NBC, my former home with the Apprentice, is now as bad as Fake News CNN. Sad!” Trump stated in a Friday morning, May 4, tweet.

NBC NEWS is wrong again! They cite “sources” which are constantly wrong. Problem is, like so many others, the sources probably don’t exist, they are fabricated, fiction! NBC, my former home with the Apprentice, is now as bad as Fake News CNN. Sad!

The Thursday story claimed that federal investigators have, for weeks, wiretapped phone lines of the lawyer, Michael Cohen, “according to multiple senior officials and individuals with knowledge of the legal proceedings involving Cohen.”

But later that day NBC News issued a correction and rewrote the story, saying that the investigators have looked at what numbers called or were called from Cohen’s lines rather than wiretapped them (listened to the calls themselves).

The difference is significant. Wiretaps must be approved by a federal judge and require a proof of an ongoing crime, said NBC News’ own analyst, Former U.S. Attorney Chuck Rosenberg, in the original article.

“The affidavits are typically highly detailed and carefully vetted by experienced lawyers,” he said.

The original article even claimed, relying on one source, that one phone call between Cohen’s line and the White House was intercepted.

Listening on a call potentially between Trump and his lawyer would have signaled a major breach of attorney-client privilege, one of the highest protections in the U.S. legal system.

“The confidentiality of conversations between lawyers and their clients is the oldest privilege recognized by Anglo-American law,” stated Faiza Patel, co-director of Liberty and National Security Program at the left-leaning Brennan Center for Justice, in a 2014 article. “Without the privilege, it is impossible for legal practitioners to give accurate legal advice because clients could never be certain they could tell their lawyers the whole story behind a case.”

Cohen faces investigation for a $130,000 payment he agreed to make in October 2016 as part of a non-disclosure agreement (NDL) with Stephanie Clifford also known as Stormy Daniels. She came out in March saying she accepted the money in exchange for not talking about a 2006 affair with Trump.

While NDLs are common practice, prosecutors have portrayed the payment as a campaign contribution to Trump, exceeding the maximum allowed contribution limit.

Cohen’s lawyer, Stephen Ryan, said that the raid was partly a referral by the Office of Special Counsel, Robert Mueller.

For about a year, Mueller has been looking into Russian government interference in the elections and allegations that the Trump campaign colluded with such interference. A separate year-long House Intelligence Committee investigation found no collusion.

Trump previously said he knew nothing about the $130,000 payment. On Thursday, he clarified that Cohen reimbursed himself for the payment using money from a monthly retainer provided by Trump.

Mr. Cohen, an attorney, received a monthly retainer, not from the campaign and having nothing to do with the campaign, from which he entered into, through reimbursement, a private contract between two parties, known as a non-disclosure agreement, or NDA. These agreements are…..

…very common among celebrities and people of wealth. In this case it is in full force and effect and will be used in Arbitration for damages against Ms. Clifford (Daniels). The agreement was used to stop the false and extortionist accusations made by her about an affair,……

…despite already having signed a detailed letter admitting that there was no affair. Prior to its violation by Ms. Clifford and her attorney, this was a private agreement. Money from the campaign, or campaign contributions, played no roll in this transaction.