President Donald Trump criticized Rep. Maxine Waters (D-Calif.) on June 25 after she incited supporters to “create a crowd” to “push back” against members of the Trump administration.

“[Waters] has just called for harm to supporters, of which there are many, of the Make America Great Again movement,” Trump wrote in a tweet. “Be careful what you wish for Max!”

Congresswoman Maxine Waters, an extraordinarily low IQ person, has become, together with Nancy Pelosi, the Face of the Democrat Party. She has just called for harm to supporters, of which there are many, of the Make America Great Again movement. Be careful what you wish for Max!

Trump sent the message on the heels of a string of incidents in which his Cabinet members were harassed and ousted from public venues. In the month of June alone, White House press secretary Sarah Huckabee Sanders, Secretary of Homeland Security Kirstjen Nielsen, and White House adviser Stephen Miller were harassed in restaurants, in separate incidents.

“Already you have members of your Cabinet that are being booed out of restaurants, who have protesters taking up at their house, who say, ‘No peace, no sleep. No peace, no sleep,’” Waters told a crowd on June 23.

“Let’s make sure we show up wherever we have to show up, and if you see anybody from that Cabinet in a restaurant, in a department store, at a gasoline station, you get out and you create a crowd,” the congresswoman said.

“And you push back on them. Tell them they’re not welcome anymore, anywhere!”

The day before Waters’s speech, the owner of The Red Hen restaurant in Lexington, Virginia, asked Sanders and her family members to leave after they had already been served appetizers. Sanders agreed and departed, but the cold shoulder treatment by the eatery didn’t go unnoticed.

A restaurant employee posted about the incident on Facebook, triggering an internet firestorm. The employee wrote that the owner, Stephanie Wilkinson, had asked Sanders to leave out of “moral conviction.”

Sanders addressed the incident in a press briefing at the White House on June 25.

“I was asked to leave because I work for President Trump. We’re allowed to disagree, but we should be allowed to do so freely and without fear of harm, and this goes for all people regardless of politics,” Sanders said.

“Some have chosen to push hate and vandalism against the restaurant that I was asked to leave from. A Hollywood actor publicly encouraged people to kidnap my children. Healthy debate on ideas and political philosophy is important, but the calls for harassment and the push for any Trump supporter to avoid the public is unacceptable.”

Trump supporters flooded The Red Hen’s review page on Yelp with thousands of negative comments, tanking the restaurant’s rating. The backlash even harmed eponymous restaurants in New Jersey and Washington, forcing the owners to post statements on social media clarifying that they are not affiliated with The Red Hen in Lexington.

Trump lambasted The Red Hen for refusing to serve Sanders because she worked for his administration.

“The Red Hen Restaurant should focus more on cleaning its filthy canopies, doors, and windows (badly needs a paint job) rather than refusing to serve a fine person like Sarah Huckabee Sanders,” Trump wrote on June 25. “I always had a rule, if a restaurant is dirty on the outside, it is dirty on the inside!”

The Red Hen Restaurant should focus more on cleaning its filthy canopies, doors and windows (badly needs a paint job) rather than refusing to serve a fine person like Sarah Huckabee Sanders. I always had a rule, if a restaurant is dirty on the outside, it is dirty on the inside!

Wilkinson’s ejection of Sanders did not break any laws, since Virginia does not have a law protecting people from discrimination based on their political views or affiliation. But Waters’s incitement appears to have violated House ethics rules, according to Judicial Watch, a nonprofit government watchdog. The group’s president, Tom Fitton, sent a letter to the Office of Congressional Ethics demanding an investigation.

The number of recent instances of harassment, and Waters’s public call for people to form crowds to “push back” against Trump team members, is starting to look like a coordinated strategy. Hours before the Red Hen incident, liberal MSNBC contributor Donny Deutsch compared Trump voters to Nazis. Waters appeared on MSNBC the same day.

On June 23, protesters forced Republican Florida Attorney General Pam Bondi to leave a movie screening. Bondi told Fox News that one of the protesters spat on her head.

On June 19, chanting protesters forced Nielsen to leave a Mexican restaurant. A group also showed up in front of Nielsen’s home playing audio of crying children and chanting “No justice, no sleep.”

On June 17, a protester chased Miller, a key Trump adviser, out of a Mexican restaurant and called him a “fascist.”

Top-level Cabinet members aren’t the only ones facing harassment. Anti-Trump professor Sam Lavigne posted the public profiles of 1,500 Immigration and Customs Enforcement (ICE) employees online on June 19. Twitter, Github, and Medium, the three online platforms Lavigne used, took down the content, but not before it was widely viewed and shared.

Since then, ICE employees have received two dozen threats, WTOP reported. One Department of Homeland Security official found a burnt animal carcass on his doorstep.

A History of Harassment

Politically motivated harassment against the Trump administration, Republicans, and conservatives is not a new phenomenon.

In one of the worst examples, James Hodgkinson, a Bernie Sanders supporter, opened fire on Republican congressmen at a baseball practice last year, wounding Rep. Steve Scalise (R-La.) and three others. An attorney who investigated the attack concluded in a report that Hodgkinson was “fueled by rage against Republican legislators” and “decided to commit an act of terrorism.”

“We are lucky to live in a country where we have the right to freely debate our differences civilly,” she added. “Harassment is never an acceptable method of disagreement.”

Months later, in November, protesters left signs outside the home of Federal Communications Commission Chairman Ajit Pai that included the names of his children, along with messages protesting the rollback of net neutrality.

“I understand that people are passionate about policy, but the one thing in America that should remain sacred is that families, wives and kids, should remain out of it,” Pai told Chicago Tribune at the time. “And stop harassing us at our homes.”

A month later, Pai was forced to cut short a speech due to a bomb threat. Security evacuated the building after receiving a phone call about a briefcase that was set to explode. 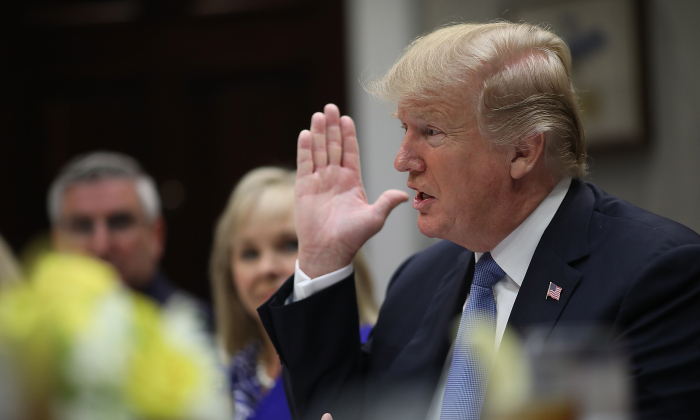