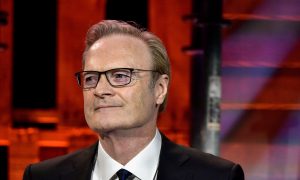 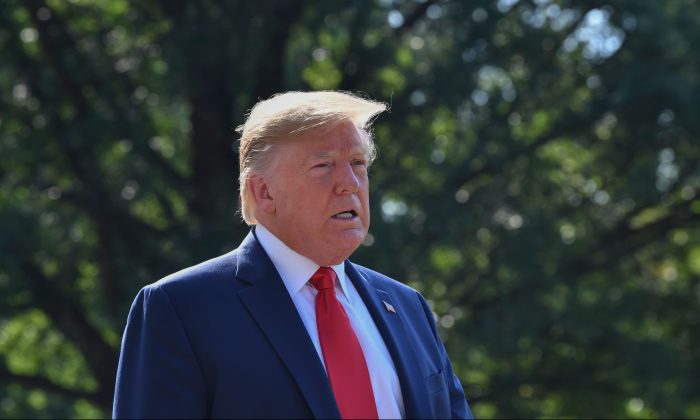 President Donald Trump speaks to the press on the South Lawn of the White House before departing in Washington on Aug. 9, 2019. (Nicholas Kamm/AFP/Getty Images)
Trump Administration

President Donald Trump said on Aug. 29 that he will cancel his trip to Poland and will instead send Vice President Mike Pence due to Hurricane Dorian.

“To ensure that all resources of the federal government are focused on the arriving storm, I have decided to send our Vice President Mike Pence to Poland this weekend in my place…this storm looks like it could be a very very big one indeed,” Trump said at the White House.

Hurricane Dorian is forecast to develop into a Category 4 hurricane, according to updates from the U.S. National Hurricane Center (NHC).

President Trump: “To ensure that all resources of the federal government are focused on the arriving storm, I have decided to send our Vice President Mike Pence to Poland this weekend in my place…this storm looks like it could be a very very big one indeed.” #Dorian pic.twitter.com/WBL3j07436

The agency has forecast that the storm will hit Florida over Labor Day weekend, although it’s not yet clear where it will make landfall.

The storm is forecast to reach Category 3 on the Saffir-Simpson scale by Friday, Aug. 30. Now, there is an “increasing likelihood of life-threatening storm surge along portions of the Florida east coast,” the National Hurricane Center (NHC) warned. Devastating hurricane-force winds are also forecast, NHC said, Reuters reported.

At its peak, the NHC said on its website, the storm would have 130 mph winds, making it a Category 4, which is the second-strongest on the scale.

Florida Gov. Ron DeSantis declared a state of emergency due to Dorian.

“It’s important for Floridians on the East Coast to monitor this storm closely,” DeSantis said in a statement. “Every Florida resident should have seven days of supplies, including food, water and medicine, and should have a plan in case of disaster.”

In a routine 5 p.m. ET update, the NHC said the storm is will develop a “west-northwestward to westward” motion by Friday evening into the weekend.

The storm is currently about 330 miles east of the southeastern part of the Bahamas and has 85 mph winds. No coastal warnings or watches have been issued yet.

“On this track, Dorian should move over the Atlantic well east of the southeastern and central Bahamas tonight and on Friday, approach the northwestern Bahamas Saturday, and move near or over portions of the northwest Bahamas on Sunday,” the agency said, adding that the storm could produce as much as 15 inches of rain in some parts of the southeastern United States when it makes landfall.

A camera outside the station captured views of Hurricane Dorian at 1:05pm ET today as it churned over the Atlantic Ocean north of Puerto Rico. pic.twitter.com/ZlfKPcuIQO

As CNN noted, Dorian, should it hit Florida as a Category 4 storm, would be the strongest hurricane to hit Florida’s East Coast since 1992’s Hurricane Andrew.

Florida was hammered by Hurricane Michael last year and Hurricane Irma in 2017.