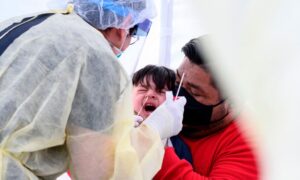 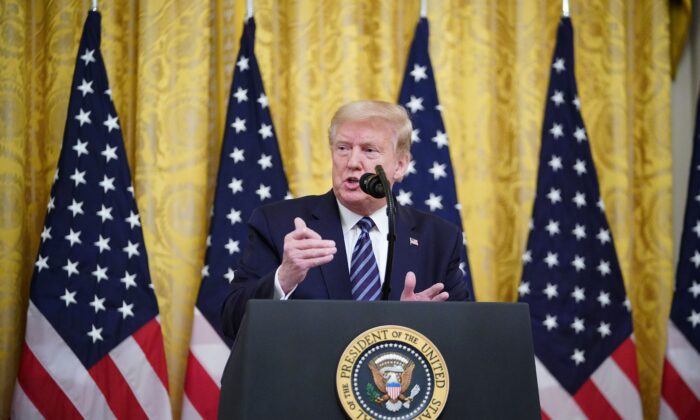 President Donald Trump speaks on protecting Americas seniors from the COVID-19 pandemic in the East Room of the White House in Washington, on April 30, 2020. (Mandel Ngan/AFP via Getty Images)
US News

Trump: Canceling US Debt Held by China Is ‘Rough Game’

WASHINGTON—President Donald Trump said defaulting on debt is a “rough game,” amid calls from some Republicans that the United States should refuse to pay its debt obligations to China as a retaliatory measure for its mishandling of the CCP virus outbreak.

On April 30, during the event “Protecting America’s Seniors” at the White House, Trump suggested that his administration could impose new tariffs on Chinese goods as a way to compensate for losses the United States has incurred due to the pandemic.

“Well, I can do it differently. I can do the same thing, but even for more money just by putting on tariffs,” he said.

China owned about $1.09 trillion in U.S. debt as of February, according to the U.S. Treasury Department. It’s the second-largest U.S. foreign creditor, following Japan’s $1.26 trillion.

“You start playing those games, and that’s tough. We have the dollar to protect. We want to protect the sanctity of the dollar, the importance of the dollar. It’s the greatest currency in the history of the world,” Trump said.

“We can do it with tariffs. We can do it other ways, even beyond that, without having to play that game. That’s a rough game.”

Economists believe canceling the debt would damage the credibility of the U.S. government. Such a move would drop the value of U.S. government bonds and increase the interest rates, causing a global financial turmoil.

When asked about the possibility of canceling debt held by China, top White House economic adviser Larry Kudlow told Politico: “Absolutely not. Full faith and credit of U.S. debt is sacrosanct. And so is dependable currency as the world’s reserve currency. Period. Full stop.”

“We take displeasure with China’s actions, but I certainly won’t get ahead of the president with those announcements,” she said in response to a question about whether the president was seriously considering new tariffs on China.

“It’s no secret that China mishandled the situation.”

She listed coverup efforts by Beijing, saying, “They did not share the genetic sequence until a professor in Shanghai did so on his own. The very next day, China shut down his lab for, quote, ‘rectification.’

“They slow-walked information on human-to-human transmission alongside the World Health Organization and didn’t let U.S. investigators in at a very important time.”

A growing number of countries have stepped up calls for more transparency from the Chinese regime, and for an investigation into Beijing’s handling of the outbreak. Two U.S. states, Mississippi and Missouri, have filed lawsuits against the regime, seeking damages for the human and economic costs of the pandemic on Americans.