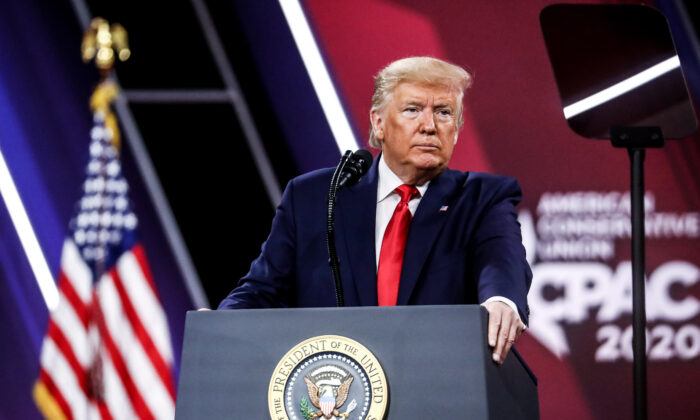 The campaign of President Donald Trump filed a lawsuit against The Washington Post, alleging the paper published two defamatory opinion articles about it last year causing “millions” in damage.

“The articles at issue herein also are part of the The Post’s systematic pattern of bias against the Campaign, designed to maliciously interfere with and damage its reputation and ultimately cause the organization to fail,” says the complaint filed on March 3 with the federal District Court in Washington.

“It’s disappointing to see the President’s campaign committee resorting to these types of tactics and we will vigorously defend this case,” she said.

One of the articles, by Greg Sargent, was published on June 13 with the title “Trump just invited another Russian attack. Mitch McConnell is making one more likely.”

It said, in part, that special counsel Robert Mueller concluded that the campaign “tried to conspire with” Moscow’s campaign to meddle in the 2016 presidential election.

This claim is “false and defamatory” the suit says. “The Mueller Report is a public record, and repeatedly finds that there was no conspiracy between the Campaign and the Russian government.”

Mueller’s March 2019 report marked the conclusion of more than two years of investigation into allegations of Trump-Russia collusion to sway the election. It concluded the probe didn’t establish any such coordination.

The article mentions that “Mueller did not find sufficient evidence of a criminal conspiracy.”

The other article, by Paul Waldman, was published on June 20, 2019, entitled “Trump: I can win reelection with just my base.”

It says in part, “who knows what sort of aid Russia and North Korea will give to the Trump campaign, now that he has invited them to offer their assistance?”

This is also “false and defamatory” the suit says. “The Campaign has repeatedly and openly disclaimed any intention to seek Russia’s help in the 2020 election.”

The claim about North Korea “has been made up out of whole cloth,” the suit says. “Not only has nobody affiliated with the Campaign made such a statement, but there has been no reporting by any reputable news outlet that the Campaign has sought or will seek North Korea’s assistance, or has had any contact with North Korea regarding the 2020 election.”

The paper “never informed the Campaign that it was going to publish the claims in the Defamatory Article, did not afford the Campaign an opportunity to verify the accuracy of the claims before publication, and did not reach out to the Campaign for comment.”

The claim that Trump invited foreign interference stemmed from his comments during a June 12, 2019, ABC News interview, where he said that if a foreigner offers information on one’s political opponents “you might want to listen” and if “there was something wrong … go maybe to the FBI.”

The suit accuses the paper of being “extremely biased” against the Trump campaign and Republicans, noting that it only ever endorsed Democrats for president since it started issuing endorsements in 1976. Sargent has been critical of the Trump administration on Twitter and in a book he wrote, the suit says. Waldman used to work for Media Matters for America, a progressive nonprofit focused on criticism of conservative media.

The purpose of the suit is to “publicly establish the truth, properly inform The Post’s readers (and the rest of the world) of the true facts, and seek appropriate remedies for the harm caused by The Post’s false reporting,” the complaint says, seeking “compensatory damages in the millions of dollars” and further not quantified presumed and punitive damages.

Last month, the Trump campaign filed a libel suit against The New York Times, saying the newspaper had published “false and defamatory statements” about the campaign in an opinion article last year.

The 2019 op-ed in question, titled “The real Trump-Russia quid pro quo,” was written by Max Frankel, who was the newspaper’s executive editor from 1986 to 1994. The article claims that Trump’s campaign and Russia had an agreement in order to defeat Clinton in the 2016 presidential election.

“The complaint alleges The Times was aware of the falsity at the time it published them, but did so for the intentional purpose of hurting the campaign while misleading its own readers in the process,” said Jenna Ellis, senior legal adviser to the campaign, in a statement.

The paper responded by saying the campaign was trying to “punish an opinion writer for having an opinion they find unacceptable.”

Defamation suits filed by public figures have a high legal bar to clear as they need to establish a false, damaging statement was made by somebody who knew it was false or had reckless disregard for whether it was false.