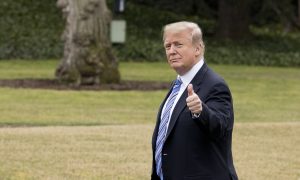 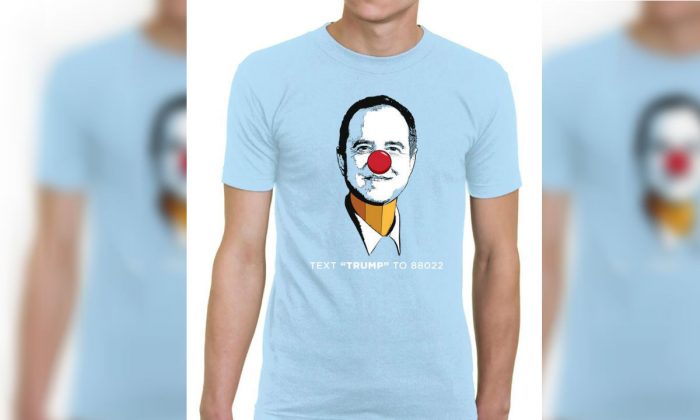 He spent two years knowingly and unlawfully lying and leaking. He should be forced to resign from Congress!

Everyone should buy a Pencil-Neck Adam Schiff shirt today!

The T-shirt is being sold on the campaign’s website for $28 and features Rep. Adam Schiff (D-Calif.) with a pencil as a neck.

The president criticized the House Intelligence Committee chairman for repeatedly making claims that Trump colluded with Russia to influence the 2016 presidential election.

At the rally on March 28, Trump nicknamed the Democratic congressman “little pencil neck Adam Schiff” and described him as “not a long ball hitter.”

Schiff was one of the leading voices among the Democratic Party that pushed the collusion claims. He previously claimed on television that “there’s plenty of evidence of collusion or conspiracy in plain sight.” Despite his claims, he has not released any evidence even though he has the authority to do so as the chair of the intelligence committee.

After Special Counsel Robert Mueller concluded its 22-month long investigation this month and found that there was no collusion, President Trump and Republicans have been calling for Schiff to resign from Congress.

Congressman Adam Schiff, who spent two years knowingly and unlawfully lying and leaking, should be forced to resign from Congress!

“Congressman Adam Schiff, who spent two years knowingly and unlawfully lying and leaking, should be forced to resign from Congress!” Trump wrote on Twitter on March 28.

Moreover, nine Republicans on the House Intelligence Committee sent Schiff a letter calling on him to step down from his post as chairman of the committee.

“Your repeated public statements, which implied knowledge of classified facts supporting the collusion allegations, occurred at the same time anonymous leaks of alleged intelligence and law enforcement information were appearing in the media,” the letter stated.

“Your actions both past and present are incompatible with your duty as chairman of this committee … As such, we have no faith in your ability to discharge your duty in a manner consistent with your Constitutional responsibility and urge your immediate resignation as Chairman of this Committee,” the letter concluded.

Despite Mueller’s findings that there is no evidence of collusion, Schiff still believes it exists.

“Mueller did not find sufficient evidence to establish conspiracy, notwithstanding Russian offers to help Trump’s campaign, their acceptance, and a litany of concealed interactions with Russia,” Schiff wrote on Twitter, without offering evidence. “I trust Mueller’s prosecutorial judgment, but the country must see the evidence.”

Mueller spent two years investigating obstruction of justice and found evidence that “does not exonerate” Trump. Barr took two days to set aside that evidence.

The entire report must be published and evidence provided to Congress so the American people can judge for themselves.

“Mueller spent two years investigating obstruction of justice and found evidence that ‘does not exonerate’ Trump. Barr took two days to set aside that evidence,” he added.

The Californian congressman brushed away calls for resignation, telling CNN that he was “more than used to attacks from my GOP colleagues and I would expect nothing less.”

Report to be Released by Mid-April

Attorney General William Barr said on March 29 that he expects to release a redacted version of Mueller’s report “by mid-April, if not sooner.” Barr says in his letter addressed to Senate Judiciary Committee Chairman Lindsey Graham (R-S.C.) and House Judiciary Committee Chairman Jerrold Nadler (D-N.Y.) that the report is almost 400-pages long, without counting tables and the appendices.

“I share your desire to ensure that Congress and the public had the opportunity to read the Special Counsel’s report,” Barr wrote.

This update comes as lawmakers and members of the public call for the release of the final report. Barr has already sent a four-page summary (pdf) of the “principal conclusions” on March 24, which did not find proof that “Trump campaign or anyone associated with it conspired or coordinated with Russia in its efforts to influence the 2016 U.S. presidential election.”

The Epoch Times Bowen Xiao and Ivan Pentchoukov contributed to this report.