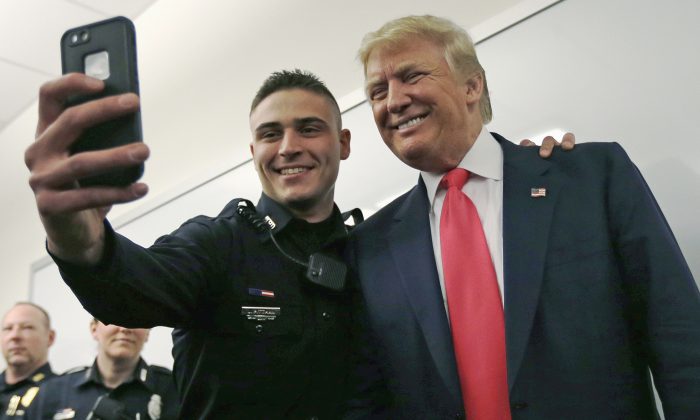 Trump Campaign Shows a Different Side After Iowa Loss

EXETER, N.H.—Stung by his second-place finish in Iowa, Donald Trump is facing new pressure to prove he can translate his massive crowds and poll leads into election wins. And his team appeared intent to demonstrate on Thursday that they’d learned from any past mistakes.

Trump’s campaign increased the day’s planned events for New Hampshire from two to five—the most he’d ever advertised on the trail. He visited with local business owners, answering questions and signing autographs, then offered a pep talk to several dozen local police.

That was in addition to two of his usual large-scale events, less than a week before next Tuesday’s primary.

A handful of reporters were also invited into his campaign headquarters to chat with staff and volunteers as he held a private meeting—a move that would have been unheard of in Iowa, where his team imposed a strict “radio silence” policy and shrouded its operation in secrecy.

Trump has blamed his second-place finish in Iowa on a long list of factors, including, at times of reflection, his own missteps. He’s conceded he could have done better if he’d spent more time and money in the state.

You know, I think in retrospect we should have had a better ground game.
— Donald Trump

“You know, I think in retrospect we should have had a better ground game,” he said in an interview this week on MSNBC.

Trump’s New Hampshire organization has, for months, appeared more robust than the operation he’d put together in Iowa. He’s racked up dozens of endorsements, and his Manchester campaign headquarters is large and brimming with staff and volunteers placing calls.

His organization was on display at a town hall event Thursday morning in Exeter, where Trump was preceded by a long list of local officials who have offered their endorsements.

Trump remains far ahead in polls in the state, which is generally considered far friendlier turf for the billionaire businessmen. The electorate tends to favor more moderate candidates, making him a more natural fit than he was in evangelical-dominated Iowa, despite his efforts to appeal to the group.

But the pressure to perform could be even greater now, as Trump works to prove that his poll numbers and crowds can translate into votes. A failure to finish in the top position here could be a devastating blow, giving new momentum to senators Ted Cruz of Texas and Marco Rubio of Florida, Iowa’s first- and third-place finishers.

It’s hard to gauge whether Trump, who plays an unusually central role in organizing and funding his own campaign, feels significant pressure to up his efforts.

Asked about his ground game at his campaign headquarters Thursday, Trump appeared content to stay his course.

“I feel fine I mean, we have what we have,” he told reporters after greeting volunteers.

He pointed to the reception he’d been getting, including the town hall in Exeter, where rowdy supporters squished into the historic Exeter Town Hall building like sardines.

“People like us, we seem to be doing very well. You know, here it’s a little bit less about a ground game,” he added. “Here you go out and you pull a trigger, and you come back. You don’t sit around for an hour and a half.”

And while his team worked to increase his visibility on Thursday, his visit wasn’t long.

Trump, who was in Little Rock, Arkansas, on Wednesday for a rally there, will be back out of the state on Friday to hold a rally in Florence, South Carolina. That state will hold its primary later this month.

Is he still confident about New Hampshire?

He appeared in an even better mood at the business stop, where he signed autographs and posed for photos.