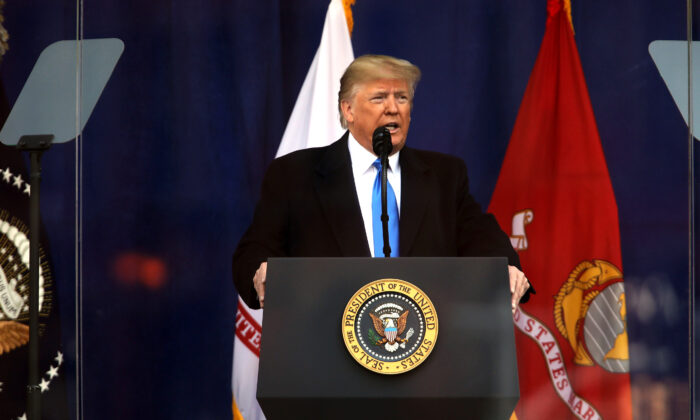 The website he linked to made explicit references to the impeachment inquiry.

He knows that it isn’t enough to end this IMPEACHMENT SCAM. We’re upping the goal to $5 MILLION!

“We’re sending President Trump the next list of donors who stepped up during this Impeachment Fight in a few hours. Don’t let him down. Make sure he sees your name,” the site says, showing a picture of Trump pointing at the camera.

✅One of our best fundraising days ever… again!

Dems just don’t get it. They are filling our bank and improving our turnout every day!

The donations, which Parscale described as “small-dollar,” add to Trump’s burgeoning war chest. His campaign and the Republican National Committee (RNC) said in October, following the initial announcement of the House-led impeachment inquiry, that they had raised $125 million in the third quarter of 2019.

RNC Chairwoman Ronna McDaniel said at the time that the RNC is currently investing millions to “hold House Democrats accountable, highlight their obstruction and take back the House and reelect President Trump in 2020,” reported NPR.

As Fox News noted, in the third quarter of 2011 then-President Obama and the Democratic National Committee raised $70 million.

When the announcement was made, former Obama senior adviser Dan Pfeiffer tweeted a warning, saying that the numbers should be a “giant wake up call” for Democrats.

Democrats are investigating as to whether Trump misused his office by pressing the Ukrainian government to investigate his political rivals, which Trump has frequently denied.

However, Trump’s campaign has countered and said the probe is helping Trump, noting a spike in contributions and Republican enthusiasm coupled with a disdain for Democratic officials.

On Wednesday, two longtime State Department diplomats testified in front of the House Intelligence Committee. Bill Taylor, the acting ambassador to Ukraine, alleged that an aide told him they overheard Trump speaking on the phone with another ambassador, U.S. Ambassador to the European Union Gordon Sondland. George Kent also testified.

On Friday, former U.S. Ambassador to Ukraine Marie Yovanovitch is expected to appear at the public hearing.