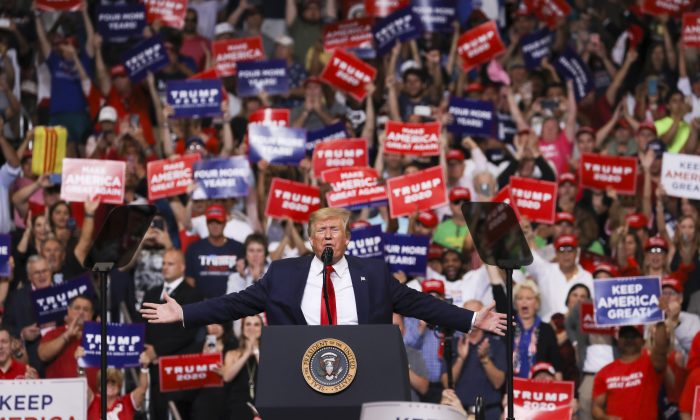 While dozens of Democrats spar for the nomination to face Trump, the Republican president faces no viable opposition as he enjoys widespread support within his party.

Brad Parscale, Trump’s campaign manager, said the fundraising haul “is a testament to the overwhelming support for President Trump.”

“No Democrat candidate can match this level of enthusiasm or President Trump’s outstanding record of results,” he said in a statement.

“The RNC’s record-breaking fundraising has allowed us to identify troves of new supporters online and continue investing in our unprecedented field program,” added Ronna McDaniel, the Republic National Committee chairwoman. “Our grassroots army is already hard at work–putting us in prime position to re-elect President Trump and Republicans across the country.”

According to the campaign, it raised some $54 million while the committee drew in another $51 million.

Trump’s campaign said on June 19 that it raised $24.8 million less than 24 hours after he launched his 2020 campaign.

“Jaw-dropping numbers from the 24 hours of the day [Donald Trump] announced his re-election campaign: $24.8 million raised. Do the math: that’s more than a million dollars an hour for an entire day. On top of an electric rally in Orlando, this shows huge Trump enthusiasm,” Trump campaign communications director Tim Murtaugh said at the time.

Trump’s campaign now has $56 million cash on hand while the committee has $44 million, according to figures provided by the campaign.

The campaign recently invested $35 million in digital and email prospecting efforts and increased total online investment by 26 percent in the second quarter of the year compared to the first.

Jaw-dropping numbers from the 24 hours of the day @realDonaldTrump announced his re-election campaign:

Do the math: that’s more than a million dollars an hour for an entire day.

On top of an electric rally in Orlando, this shows huge Trump enthusiasm.

Top Democrats have seen relatively strong fundraising figures but have struggled because of the depth of the field, with more than 20 contenders for the nomination to oppose Trump.

Pete Buttigieg, the mayor of South Bend, Indiana, a city of approximately 100,000 people, said this week that his campaign raised $24.9 million in the second quarter.

Many Democratic nominees have not yet released second-quarter fundraising figures.

Thank you to the over 400,000 of you who have invested in this campaign, and who helped us raise over $24,800,000 this quarter alone. You inspire us every step of the way, and we’re just getting started. Text SHOWUP to 25859 to keep the momentum going! pic.twitter.com/g1SIlgt4Eo

Former vice president Joe Biden suggested in mid-June that he had raised nearly $20 million for his presidential bid but his campaign has not released official figures.

Sen. Bernie Sanders (I-Vt.), a socialist, said in April that his campaign raised $18.2 million in the first quarter.