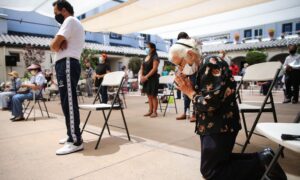 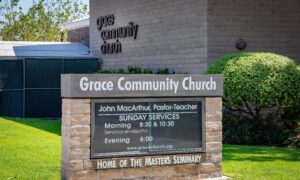 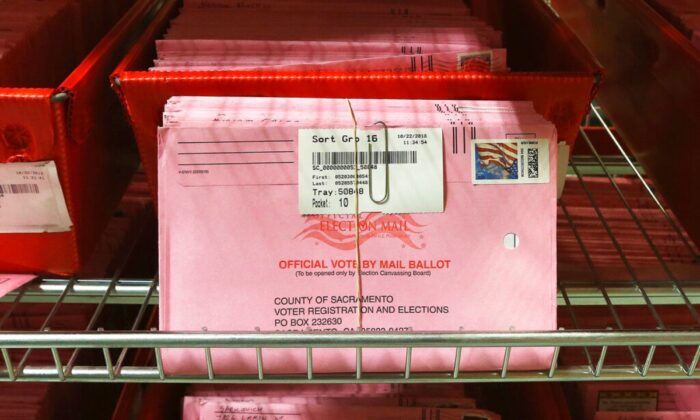 Mail-in ballots are placed in bins to be processed after arriving at the Sacramento County Registrar of Voters in Sacramento, Calif., on Oct. 22, 2018. (Rich Pedroncelli/AP Photo)
Judiciary

Both President Donald Trump’s reelection campaign and the Republican National Committee aren’t allowed to intervene in a state-level lawsuit brought by Democrats to change the rules for the Nov. 3 elections, the Pennsylvania Supreme Court ruled.

The court turned down requests to intervene from the Trump campaign, the RNC, and from several activist groups including Common Cause of Pennsylvania, and the League of Women Voters of Pennsylvania. Parties rejected as intervenors are still allowed to file friend-of-the-court briefs, the order dated Sept. 3 stated.

Trump narrowly won Pennsylvania in 2016 with 48.2 percent of the popular vote, beating Democrat Hillary Clinton, who won 47.5 percent, according to Ballotpedia. Pennsylvania has 20 electoral votes out of the 270 needed to be elected president.

In the original complaint filed in the lawsuit, state Democrats and several individual Democratic candidates for office sued Secretary of the Commonwealth Kathy Boockvar, a Democrat, along with all 67 county election boards.

The plaintiffs claim that state election rules pertaining to voting-by-mail, as applied during the current pandemic, led to large numbers of mailed-in ballots being rejected because of minor defects, not being accompanied by a secrecy envelope, and receipt after 8 p.m. on Election Day during the recent primaries.

They seek greater flexibility for election officials to do things such as provide drop boxes, as well as a declaratory judgment and injunction claiming the state constitution and state election law are being violated.

“The 2020 Primary was the test run for the implementation of” recent legal changes, the complaint states. “Analysis of the Primary identified implementation snags that needed to be smoothed in time for the November General Election.”

Legislation is pending in the Pennsylvania General Assembly “to correct some of these issues, but in light of the existing extreme partisanship, may never be adopted.” Because time is running out before the November elections, the plaintiffs “are compelled, to file this petition with this Court.”

Although voting-by-mail “has been available for absentee electors in Pennsylvania for decades, in 2019, the General Assembly passed Act 77 to expand mail-in voting to all registered Pennsylvania voters who choose that option to exercise their constitutional franchise to vote,” the complaint states.

Voting by mail “is generally safe and reliable,” the complaint states, contradicting some studies and recent reports questioning its efficacy.

Through Act 77, signed by Democratic Gov. Tom Wolf on Oct. 31, 2019, “the General Assembly created a universal right to vote by mail in Pennsylvania elections,” permitting “no excuse mail-in voting for all qualified electors.”

But the presence of COVID-19 “presents unpredictable constraints upon in-person voting that, in turn, raises questions about ambiguities in Act 77.”

Republicans are opposed to more drop boxes and don’t want counting extending after Election Day, expressing concerns of voter fraud. The Trump administration sued state and county election officials in June, claiming some of the methods of ballot collection during the primaries were improper.

Some 1.8 million residents voted by mail in the June 2 primary, and 4 million may vote by mail in November, according to The Center Square. Republican state lawmakers and Wolf have been negotiating over possible changes to state election law, but it’s unclear if progress will be made in time for Election Day.

The Trump campaign couldn’t be immediately reached by The Epoch Times for comment.

In a separate proceeding in a neighboring state, activist groups are suing Ohio Secretary of State Frank LaRose, a Republican, in federal court over his directive implementing a state law that instructs each county to offer only one drop box for absentee ballots in the upcoming elections, The Epoch Times previously reported.

The lawsuit, filed by the League of Women Voters of Ohio and the NAACP, claims that more drop boxes must be allowed because of reported slowdowns in processing by the U.S. Postal Service. LaRose argues state law doesn’t allow the addition of extra drop boxes.