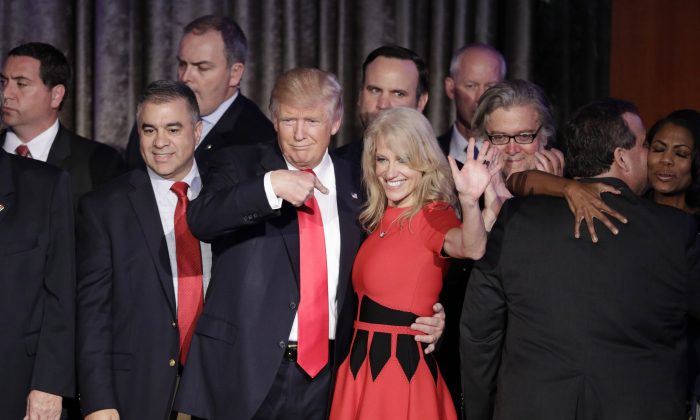 It is being noted that Kellyanne Conway has become the first woman to run a successful presidential campaign.

Conway was called to manage Trump’s campaign after he removed Paul Manafort earlier this year.

On Wednesday, Conway told ABC that she received a phone call from Hillary Clinton aide Huma Abedin on Election Day. She then handed the phone to Trump, who then spoke with Clinton directly.

“They had a very gracious exchange,” Conway said. “As I understand it, Secretary Clinton commended Donald Trump on a hard-fought race and congratulated him for his victory and he told Secretary Clinton she’s very smart, very tough, had waged a tremendous campaign.”

“He respects her and her family,” Conway said of Trump as he was speaking to Clinton. “It was a very pleasant exchange.”

“[Trump] is a problem-solver. He’s a builder,” Conway told CNBC. “When you are a businessman, you are accountable. You can’t run your business with $19 trillion worth of debt like the federal government does somehow.”

“He’s a game day player who won,” she added.

As president, Trump, meanwhile, will “hurry to get things done” as he works with a Republican-controlled House and Senate.

“There are a lot of folks on the gravy train scared to death, petrified today that the wheels may come off it, and we might just rip the engine out of the gravy train,” Conway said, adding that the billionaire businessman was “a self-funding man by and large.”

“You need to campaign, you need to connect with the people,” she told CNBC. “Hillary Clinton just could not break past that stubborn 45, 46, 48 percent in these states that President Obama carried twice,” Conway noted.

After the election, Conway added that she will “serve in whatever capacity I’m asked, where I feel like a can be most helpful” in the Trump administration.