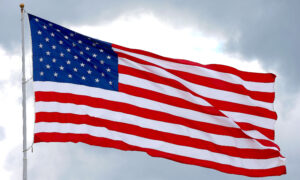 Trump Campaign Fundraiser: ‘This Is a Spiritual Battle’

Trump campaign fundraiser Pamela Martin said at a rally in Washington D.C. on Saturday, there is no doubt that President Trump won the election, but that it was stolen and she wants to take it back, adding that the battle is both spiritual and physical.

“God is in charge. There are many corrupt judges, all the way up to the top, and that will be turned around by God. God will see that every enemy be turned down. Victory will be here because President Donald Trump is one of our greatest presidents in all of history. ”

“And I will tell you this, nobody, nobody can come against God and his army and his army is the people, that people and the Constitution of the United States and every single person standing here will stand for Him,” Martin said.

Martin said other than the corruption, mainstream media brainwashed and silenced people too.

She agreed with General Flynn that this is not about one man in the presidency, it’s much bigger.

“This is a spiritual battle, a physical battle, and it’s coming down, because for so long, they’ve been trying to control us, it will no longer happen, because the spiritual battle now is with God, and God and Jesus will bring us back, and this is about bringing our nation back under God,” Martin said.