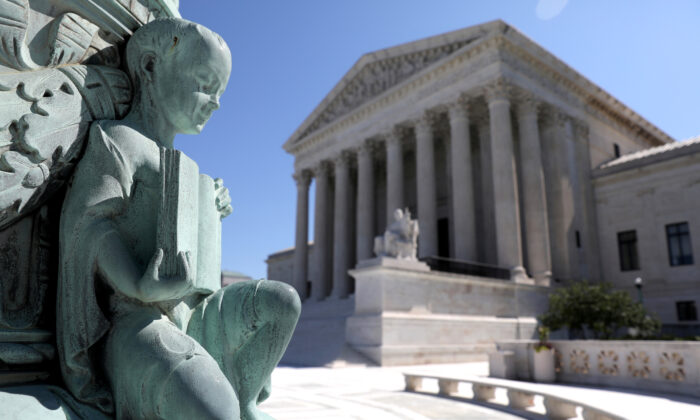 A cherub figure with a book, symbolizing learning, is seen in a general view of the U.S. Supreme Court building in Washington, on July 2, 2020. (Jonathan Ernst/Reuters)
Pennsylvania

President Donald Trump’s reelection campaign asked the U.S. Supreme Court on Nov. 4 to let it join Pennsylvania Republicans’ lawsuit seeking to rein in a three-day extension of a receipt deadline for mail ballots that they say was illegally extended.

Trump was leading Democrat Joe Biden 50.3 percent to 48.6 percent, or about 109,000 votes out of more than 6.3 million cast in Pennsylvania, with 88 percent of precincts reporting, as of 3 p.m. local time on Nov. 5, according to The Associated Press. Pennsylvania has 20 electoral votes out of the 270 needed to be elected president.

In 2016, Trump won the Keystone State by 44,292 votes out of more than 6 million cast. The Republican candidate secured 48.2 percent of the popular vote in the state, beating Democrat Hillary Clinton, who won 47.5 percent, according to Ballotpedia.

Late on Oct. 28, the nation’s highest court denied Pennsylvania Republicans’ second emergency request aimed to undo a state Supreme Court ruling that forced the state’s election officials to accept mail-in ballots received up to three days after Election Day, which was Nov. 3. Extending the deadline without the consent of the state legislature violates both state and federal law, the GOP argues.

Trump denounced the U.S. Supreme Court ruling the night before Election Day, writing on Twitter that it was “VERY dangerous.” The ruling “will allow rampant and unchecked cheating and will undermine our entire systems of laws. It will also induce violence in the streets. Something must be done!”

Twitter promptly placed a disclaimer on the tweet that reads, “Some or all of the content shared in this Tweet is disputed and might be misleading about an election or other civil process.” It also added a link labeled: “Learn how voting by mail is safe and secure.”

In fact, experts say voting by mail is fraught with problems, as it gives wrongdoers greater opportunities for fraud compared to in-person balloting.

The 4–4 U.S. Supreme Court decision left in place the state Supreme Court ruling that in addition to extending the receipt deadline, it also required election officials to presume that any ballot received by the extended deadline that lacks an intelligible postmark was mailed by Election Day.

The newest justice, Amy Coney Barrett, didn’t participate in the case. During her recent confirmation hearings, Barrett refused to discuss election-related cases or whether she would recuse herself from such cases. Barrett participated in her first set of oral arguments in the nation’s highest court earlier this week.

In the case at hand, Republican Party of Pennsylvania v. Boockvar, which remains pending, Republicans asked the U.S. Supreme Court to fast-track consideration of whether the state court “usurped the Pennsylvania General Assembly’s plenary authority” under the U.S. Constitution to decide how members of the Electoral College are appointed.

They also wanted the high court to decide “whether the [state court] majority’s extension and presumption are preempted by federal statutes that establish a uniform nationwide federal Election Day.”

The Trump campaign’s motion for leave to intervene as a petitioner in the case states, “One week ago, several Justices predicted that the Pennsylvania Supreme Court’s unconstitutional expansion of mail voting could create ‘serious post-election problems,’” citing a statement issued by Alito.

“The Justices stressed that these important issues had not ‘escape[d] [the Court’s] review.’ Because the certiorari petitions ‘remain before us,’ those petitions could be ‘granted,’ and the case could be resolved under a ‘shortened schedule,’ if the time came when this Court’s review was necessary,” the motion states.

“That time has come. Given last night’s results, the vote in Pennsylvania may well determine the next President of the United States. And this Court, not the Pennsylvania Supreme Court, should have the final say on the relevant and dispositive legal questions.”

The campaign agrees with the petitioners “that the Pennsylvania Supreme Court’s judgment violates federal law.”

The U.S. Supreme Court’s docket indicates that a response to the campaign’s motion from Pennsylvania Secretary of State Kathy Boockvar, a Democrat, was due by 5 p.m. on Nov. 5.