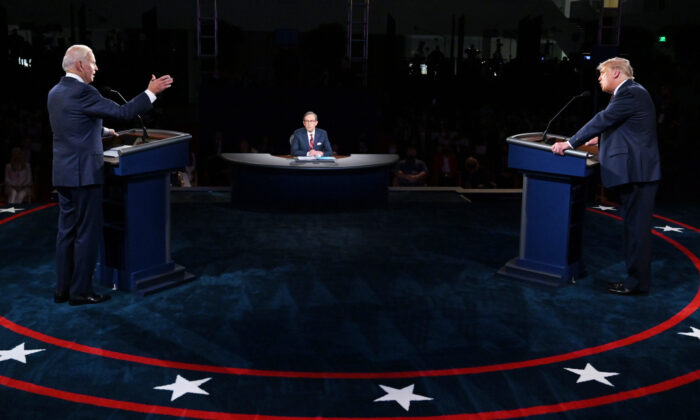 The leaders of President Donald Trump reelection campaign on Thursday accused The Commission on Presidential Debates (CPD) of bias, calling the organization’s leadership “permanent swamp monsters” who are “any thing but” nonpartisan.

During a call with reporters on Oct. 1, Trump campaign manager Bill Stepien read through a list of the commission’s leadership and pointed to each official’s anti-Trump comments and the amounts each had donated to Democrats. Stepien noted that even the Republicans on the commission hold unfavorable views of Trump.

“Here’s what we know about the CPD,” Stepien said after reading out the CPD description of itself as a nonpartisan entity. “Those definitions, those characterizations could not be further from the truth.”

CPD did not respond to a request for comment. The commission’s website states that “the CPD is an independent organization.”

Stepien said that the commission’s co-chair, Frank Fahrenkopf, made a comment to Nantucket Magazine in August suggesting that Trump was not as smart as the other candidates in the 2016 election.

“What I learned in 2016, which was an odd year, was that the American people are not necessarily going to vote for who they think is the smartest person,” Fahrenkopf said.

The second of the three co-chairs, Dorothy Ridings, contributed $9,000 to Democrats over the years, Stepien said. An Epoch Times review of Federal Elections Commission data shows that Ridings contributed more than $8,000 exclusively to Democrats since 1998.

Kenneth Wollack, the third co-chair, “criticized the president saying that he ‘stated admiration for some of the world’s strongmen,'” Stepien said, adding that Wollack contributed over $5,000 to Democrats, including to the Obama campaign.

“Rather than a cross-section of America, this group very much comes across as what you might see at the evening gala at the Metropolitan Club. For the most part these are permanent swamp monsters,” the Trump campaign senior adviser said. “They care more about helping themselves out.”

The campaign made accusations of bias amid a push by the Biden campaign to change the rules for the second and third debates. Miller said the Trump campaign has not requested and opposes all changes.

Trump, in a Twitter post earlier in the day, asked “why would I allow the Debate Commission to change the rules for the second and third Debates when I easily won last time?”

During Tuesday night’s debate, some criticized Trump for interrupting moderator Chris Wallace before posing his own questions. At one point, the president told the Fox News host: “First of all, I guess I’m debating you, not him. But that’s okay. I’m not surprised.”

That led some Democrats, including House Speaker Nancy Pelosi (D-Calif.), to call off the next two Trump-Biden debates. Biden’s campaign said Tuesday that the former vice president would attend the next two.

The Commission on Presidential Debates on Wednesday, in a statement, said it would implement “additional structure” in the next two debates, without elaborating.

“The Commission on Presidential Debates (CPD) sponsors televised debates for the benefit of the American electorate. Last night’s debate made clear that additional structure should be added to the format of the remaining debates to ensure a more orderly discussion of the issues,” the group said.

Those sponsors will now “be carefully considering the changes that it will adopt and will announce those measures shortly,” the commission said, without elaborating. “The Commission is grateful to Chris Wallace for the professionalism and skill he brought to last night’s debate and intends to ensure that additional tools to maintain order are in place for the remaining debates.”

The CPD works with both candidates before the debates to create rules.

McDaniel, in her interview with Fox, suggested that a moderator shouldn’t move on to the next segment until a candidate answers the original question. Some GOP members criticized Wallace for trying to move on during contentious segments or when Trump pressed Biden to answer questions about Antifa, the Supreme Court, or other issues.