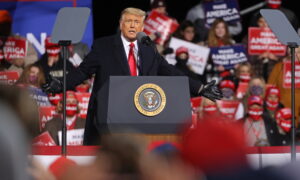 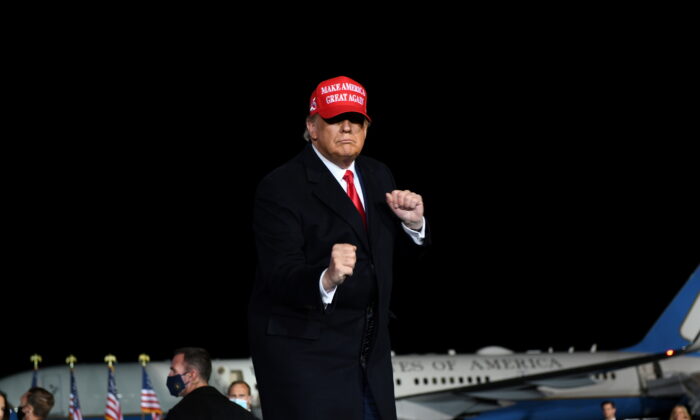 “We feel very good. We think that President Trump is going to hold all the Sunbelt states that he won previously,” Jason Miller, the campaign adviser, told ABC’s “This Week.”

He is referring to the “Sunbelt” states of North Carolina, Arizona, Georgia, and Florida, which Trump won in 2016.

“More than 92 million Americans have already voted. That’s well over half of the number that voted in 2016. So given all that, what is your clearest path to 270 right now?” Miller was asked on the ABC program.

“If you speak with many smart Democrats, they believe that President Trump will be ahead on election night, probably getting 280 electoral (votes) somewhere in that range, and then they’re going to try to steal it back after the election,” Miller said Sunday morning, referring to a possibly lengthy ballot-counting process post-Election Day.

“We believe that we will be over 290 electoral votes on election night, so no matter what they tried to do, what kind of hijinks or lawsuits or whatever kind of nonsense they try to pull off, we’re still going to have enough electoral votes to get President Trump re-elected,” Miller added.

Miller, on the program, said that he believes Trump will out-perform in several key demographics as compared to four years ago.

“President Trump is going to get well over 10 percent of the Black vote. I think he’ll get over 20 percent of African American men. President Trump will probably get 40 percent of the Latino vote,” he said. “The entire demographic shift within these parties—it’s a different world now … and that’s why we’re trying to turn out our supporters. We feel good about it.”

Miller told the program that Nevada and Minnesota could be flipped to Trump this year.

Over the past weekend, Minnesota’s Attorney General, Keith Ellison, issued a warning to fellow Democrats about the state.

“I will tell you that I believe in our campaign workers and organizers. They’re working extremely hard. I can tell you that Minnesotans know what a problem Trump is,” Ellison told CNN. “They know he doesn’t care about their health care. They know all the bad things about him. But, you know, there are some folks who still are supporting him. And so what I tell people is, one, he does have a shot, don’t play it cheap, work hard for every single vote. And don’t stop until 8 o’clock on November 3.”