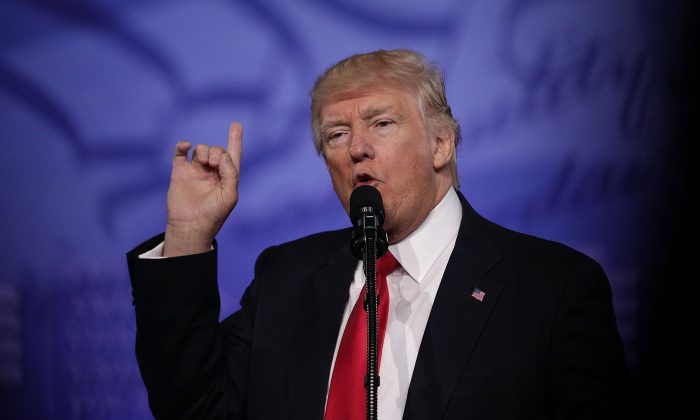 President Donald Trump walks on stage prior to his address to the Conservative Political Action Conference at the Gaylord National Resort and Convention Center in National Harbor, Maryland on Feb. 24, 2017. Hosted by the American Conservative Union, CPAC is an annual gathering of right wing politicians, commentators and their supporters. (Alex Wong/Getty Images)
Politics

President Donald Trump made it clear he intends to continue to hold the “dishonest” media’s feet to the fire, in his speech at the Conservative Political Action Conference (CPAC) in Maryland on Friday.

He lamented coverage of him by some media misconstruing and changing the meaning of his words. “[They] did not explain that I called the fake news the enemy of the people—the fake news. They dropped off the word ‘fake.’ And all of a sudden the story became ‘the media is the enemy.'”

Trump mentioned polling from major media that he said was dishonest, going all the way back to the election season, calling out CBS, ABC, NBC, and even mentioning CNN by his pet-name for them, the “Clinton News Network.”

Trump did take note of a story written for Reuters by a “very honorable man” the previous day that he said was fair.

“There are some great reporters around, they are talented and honest as the day is long; that is great. But there are some terrible, dishonest people that do a tremendous disservice to our country, and to our people.”

Trump noted the crowd size, predicting that the media would not report on it.

“The place is packed. There are lines that go back six blocks, and I tell you that because you won’t read about it, okay?”

Reporters at those outlets were taken by surprise when they were barred at the entrance, leading to a rash of angry tweets, and even boycotts by other media at the gaggle.

CNN was blocked from WH @PressSec‘s media gaggle today. This is our response: pic.twitter.com/8SfY2uYKEI

Other outlets that were admitted to the gaggle were The Wall Street Journal, ABC, CBS, NBC, Bloomberg, Breitbart, Fox News, and the Washington Times. The Associated Press and TIME boycotted the event.