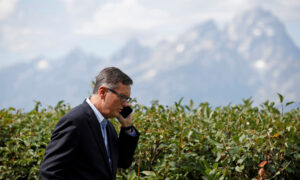 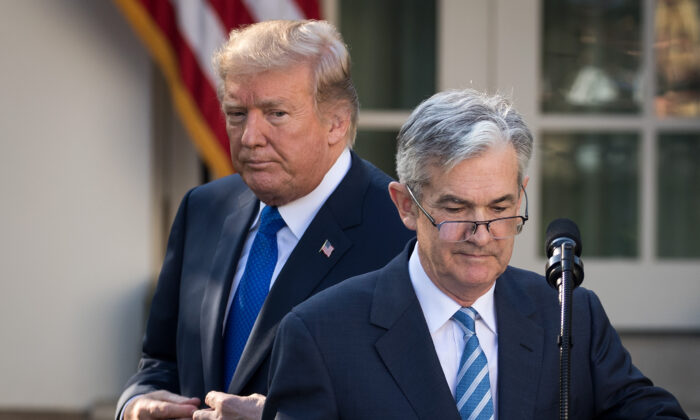 President Donald Trump looks on as then-nominee Federal Reserve Chairman Jerome Powell takes to the podium during a press event at the White House, on Nov. 2, 2017. (Drew Angerer/Getty Images)
Business

'Other central banks are much more aggressive,' the President said, adding, 'We should be leading, not following.'
By Tom Ozimek
FONT BFONT SText size
Print

President Donald Trump has renewed calls on the Federal Reserve to slash interest rates as the world’s central banks consider a joint policy response to the elevated risk of economic fallout from the novel coronavirus.

In signs of a growing likelihood of a major coordinated response to the virus epidemic, finance ministers of G-7 countries are planning a call Tuesday to discuss actions to prevent financial meltdown. Similarly, the International Monetary Fund and the World Bank said in a joint statement Monday they stood ready to help member countries cope with the potential economic fallout from the fast-spreading virus.

Trump, meanwhile, took to Twitter Monday to express his view that the Fed has been “slow to act” compared to other central banks, which he said are “pumping money into their economies,” and urged Fed Chairman Jerome Powell to cut rates.

“We should be leading, not following,” Trump said in the tweet, arguing that as other central banks have been “much more aggressive” with slashing rates, the United States has been left at a “competitive disadvantage.”

As usual, Jay Powell and the Federal Reserve are slow to act. Germany and others are pumping money into their economies. Other Central Banks are much more aggressive. The U.S. should have, for all of the right reasons, the lowest Rate. We don’t, putting us at a…..

The Fed’s target rate is in the 1.5 percent – 1.75 percent range, while eurozone countries like Germany have negative rates.

A policy of negative rates was introduced in the eurozone in mid-2014 in a bid to stimulate flagging European economies by prompting banks to lend more money instead of parking excess liquidity at central banks.

The dollar index chart, or DXY, shows the greenback spiking around that time and remaining in an elevated range for years.

The strong dollar, largely a consequence of relatively high U.S. interest rates compared to eurozone rates, dampens exports. This dynamic is one that Trump has repeatedly said puts the United States at a competitive disadvantage.

Meanwhile, there is a growing consensus that the Fed—along with other central banks around the world—will soon ease to avert a virus-driven financial crisis.

Wall Street’s dramatic equities dive last week, coupled with data showing Chinese factory activity contracting at its worst pace ever in February, led Powell to issue an unscheduled declaration that the Fed would act as required to provide support.

In a Feb. 28 statement, Powell said the Fed will “act as appropriate” in the face of risks posed by the epidemic, although he said the economy remains in good shape overall.

“The coronavirus poses evolving risks to economic activity,” Powell said. “The Federal Reserve is closely monitoring developments and their implications for the economic outlook. We will use our tools and act as appropriate to support the economy.”

The news led to a rise in bets in favor of an interest rate cut, with traders seeing a 100 percent chance of a 50 basis point rate cut at the Fed’s March 16-17 meeting, according to CME Group’s FedWatch tool. Some expect the cut to come sooner.

Goldman Sachs economists said in a note Sunday that they believe the Fed might cut rates by 50 basis points even before the March policy meeting, with its analysts predicting an additional 50-basis-point cut in the second quarter.

“After Chair Powell made his intentions clear, the S&P 500 rallied,” said Allen Sukholitsky, chief macro strategist at Xallarap Advisory, commenting on Monday’s decisive stock market rebound, which also saw the Dow Jones Industrial Average rise over 1,294 points, or 5 percent, in the biggest ever point gain for the index.

“However, in the midst of the rally, the yield on the 30-Year Treasury dropped to January’s yield on the 10-Year Treasury,” Sukholitsky told The Epoch Times by email, stressing that many investors continued to favor low-risk assets.

“Now that the interest rate market is pricing in 50 basis points’ worth of cuts by March 18, little room remains for a traditional policy response during the next recession,” he added.