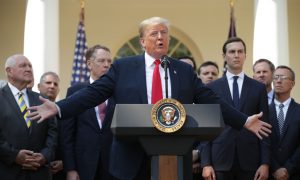 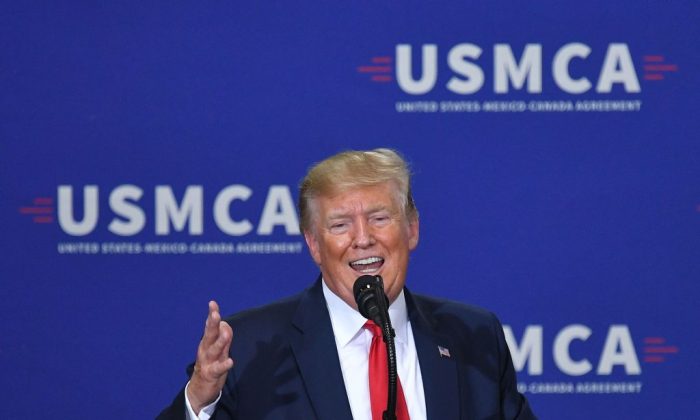 Trump Calls on Congress to Stop ‘Playing Around,’ Pass USMCA

WASHINGTON—President Donald Trump is pushing hard for the approval of the new free trade agreement with Canada and Mexico, whose fate is uncertain in Congress.

The pact may drift into the whirlpool of the 2020 election cycle if it faces further delays, he warns.

During a speech at Derco Aerospace Inc. in Milwaukee on July 12, Trump touted the U.S.–Mexico–Canada Agreement (USMCA) as the “most modern, cutting-edge trade agreement in history.”

“On behalf of our nation’s loyal hardworking citizens, I’m calling on Congress to pass USMCA and send it to my desk immediately for signature,” Trump said. “We shouldn’t be playing around. And every day that goes by, it gets more and more political because we get closer and closer to the election, and maybe it’s harder.”

Trump also said he was not looking to get credit for the USMCA, asking Democrats to “call it a bipartisan bill.”

In November 2018, the leaders of the United States, Canada, and Mexico signed the USMCA, which would replace the 25-year-old North American Free Trade Agreement (NAFTA). Mexico became the first country to ratify the new trade deal, after its Senate approved it with an overwhelming majority on June 19. The agreement now needs to be ratified by legislatures in Canada and the United States.

According to Trump, the USMCA is a “tremendous victory” for American farmers.

The USMCA also has strong labor rules, which makes the deal an important milestone for international trade, according to trade experts.

Under the new agreement, 75 percent of auto content must come from North America, up from the original threshold of 62.5 percent. The higher threshold will help boost production and employment in the region.

The agreement also incentivizes the use of high-wage labor in auto manufacturing, requiring 40 percent of each car and 45 percent of each truck to be made by employees earning at least $16 an hour in order to qualify for duty-free treatment. The labor provisions of the accord will boost production in the United States and Canada, since the average manufacturing wage in Mexico is about $2 to $3 an hour, according to the USTR.

The agreement contains a dedicated chapter on digital trade, he said, adding that the comprehensive and strong rules protect the free flow of data and prohibit members from enacting barriers to data flows.

Democrats, who control the House, have repeatedly raised issues concerning the USMCA and called for stronger enforcement provisions. Speaker of the House Nancy Pelosi (D-Calif.) indicated that enforcement was the “overarching issue” in the agreement.

“You can agree on a number of subjects, but if you do not have effective enforcement in the agreement, you’re just having a conversation and you’re going to be having the same problems that you had before,” she told reporters on June 19, calling the agreement “NAFTA with sugar on top.”

“It isn’t that much of a change,” she said. “But the president could go out there and say, ‘See, I got a better NAFTA’ when it really isn’t going to make a difference in the lives of the American people.”

Democrats also demand tougher language on labor and environmental standards. In addition, they argue the pharmaceutical provisions in the agreement would limit Congress’ ability to reduce drug prices.

After the August recess, Congress will be busy resolving budget and debt ceiling matters. Nevertheless, there is still a hope that the deal can be ratified after the August break, according to Scott Miller, a senior adviser at the Center for Strategic and International Studies, a Washington-based think tank.

The Trump administration and House Democrats have “formed a working group to deal with the very specific issues that Democrats have raised and to work directly with Ambassador [U.S. Trade Representative Robert] Lighthizer to fix that,” he said on a podcast.

If both sides agreed, he said, “you’re able to make the rest of the things move pretty well.”

The USMCA is estimated to have a significant impact on the U.S. manufacturing sector, particularly automotive. A study by the Office of the U.S. Trade Representative found that the agreement would boost automotive manufacturing investments in the United States by $34 billion over the next five years, adding nearly 76,000 new jobs.