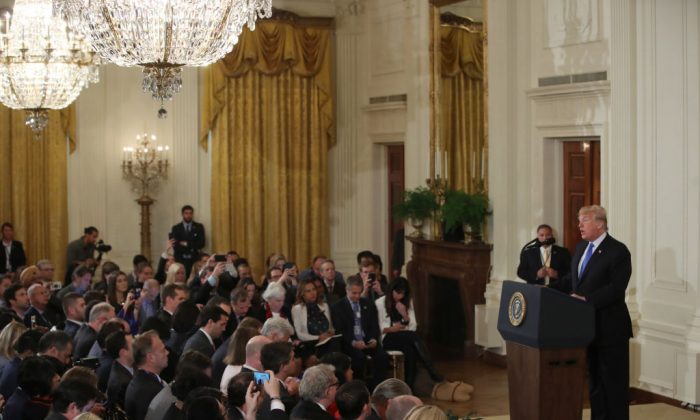 President Donald Trump gives remarks a day after the midterm elections in the East Room of the White House on Nov. 7, 2018. (Mark Wilson/Getty Images)
Trump Administration

Trump Calls on Congress to Put Partisanship Aside, Join Together

With the midterms almost in the rearview mirror and a divided Congress soon to be sworn in, President Donald Trump said he’s planning to work with Democrats on where they can agree, and make compromises where necessary.

“Now is the time to join together, put partisanship aside, and keep the American economic miracle going strong,” he said at a press conference Nov. 7.

He admitted he didn’t agree with Democrats on “a lot of policy” issues, and didn’t expect that they would be able to work on everything together, but said there are areas where they were all on the same page, such as improving the economy, lowering the cost of prescription drugs, trade, infrastructure, and environmental regulations.

He said he also thinks Democrats support him on building a wall on the southern border, although few have said so publicly.

“I think we’re going to have a lot of reason to do it,” he said about getting legislation on those issues passed, “and I really do believe we’re going to be able to do that.”

He said he would be willing to make compromises when it comes to tax cuts for the middle class, which he said might mean increasing taxes on businesses or wealthier Americans, and coming to an agreement on what to do with children of illegal immigrants—”dreamers” as they’re sometimes called—who currently don’t have legal status in the United States.

Responding to rumors that the House Democrats will use their subpoena power to investigate him, Trump said he could imagine only two scenarios: Democrats can either legislate or investigate, but not both at the same time.

He said he thinks voters have “investigation fatigue” and pointed to an NBC exit poll that showed 46 percent of respondents disapprove of how special counsel Robert Mueller is handling the Russia investigation. When asked about whether he was going to fire Mueller after the midterms, he said that even though he didn’t think the ongoing investigation was good for the country, he was letting it play out because he doesn’t have anything to hide.

He also hinted that if Democrats planned to go the route of investigating, the Republican-controlled Senate would start investigating leaks of classified information from the House.

“It really could be a beautiful type of bipartisanship situation,” he said, echoing words used the night before by House Minority Leader Nancy Pelosi (D-Calif.), who said the Democrats will “strive for bipartisanship.”

Speaking of the minority leader, the president said he had a very “warm” conversation on election night with Pelosi, who could potentially regain the gavel as Speaker of the House.

Early on Nov. 7, Trump wrote on Twitter that he thought she “deserves” the position, and said that if Democrats give her a hard time, “perhaps we will add some Republican votes.”

He later clarified that he wasn’t being facetious.

“I give her a lot of credit. She works very hard,” Trump said. “Hopefully, we can all work together next year to continue delivering for the American people.”

Pelosi also said she hoped they could work together for the American people.

“I think Democrats come into this majority with a responsibility, not to [be] Democrats—it’s not about Democrats or Republicans—it’s about the United States of America,” she said Nov. 7. “We have a great obligation to honor the vision of our founders, and what they were so courageous in fighting for.”

Senate Minority Leader Chuck Schumer (D-N.Y.) said in a press conference the same day that he was interested in working with Republicans on immigration reform, something he says he has been passionate about for 30 years.

“Comprehensive immigration reform … is something I would seriously look at. It would have a chance in a bipartisan Senate for passing,” he said, adding that there are also things he would like to get done on infrastructure.