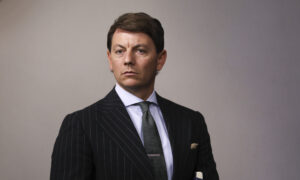 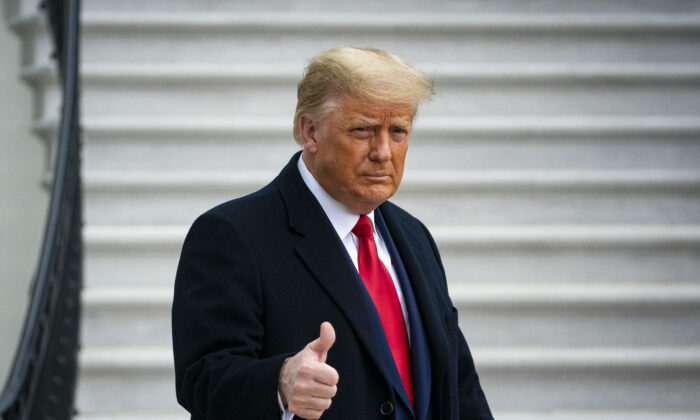 President Donald Trump gives a thumbs up as he departs on the South Lawn of the White House, in Washington on Dec. 12, 2020. (Al Drago/Getty Images)
Trump Administration

President Donald Trump on Monday phoned into a conservative youth conference held in West Palm Beach, Florida, where he urged the Justice Department and “other people” to step up in order to get to the bottom of election integrity concerns.

“We are fighting really for the country because, this election, we won this election in a landslide,” Trump told the crowd of students attending Turning Point USA’s four-day student conference, where many prominent conservative speakers took the stage.

“The problem is we need a party that’s going to fight and we have some great Congress men and women that are doing it and some others, some great fighters. We won this in a landslide. They know it and we need backing from like the Justice Department and other people have to finally step up,” he added.

Trump: “We are fighting really for the country because, this election, we won this election in a landslide … I just want to thank Charlie for the support.” pic.twitter.com/PDyk7OZiq3

The president, who attended the same conference in person last year, also expressed his appreciation to his youth supporters. The event has attracted media scrutiny over the organization’s decision to host a large in-person event amid the CCP (Chinese Communist Party) virus pandemic.

Trump and his allies have been fighting against the clock to protect the sanctity of the ballot box. His campaign and various third-parties have launched a slew of lawsuits aimed at addressing concerns about voting irregularities and alleged unconstitutional actions passed by state and election officials in the 2020 election.

Many of the lawsuits are asking judges to prevent presidential electors in those states from taking any official action until all allegations of fraud are transparently and independently addressed.

According to witness and expert testimony that emerged after Nov. 3, it’s possible that a significant proportion of votes were cast and counted in violation of state election codes and the U.S. Constitution.

Allegations about election fraud have been repeatedly denied by leading election officials, while critics and members of the media have characterized the claims as “baseless.” So far a large proportion of cases filed have been thrown out by judges for procedural reasons, including by the U.S. Supreme Court.

Republican lawmakers are also joining the “fight” by building a strategy to challenge the Electoral College votes during the Jan. 6 congressional joint session, where the presidential electors’ votes are counted.

Several House members have vowed to launch challenges to prevent Congress from counting the slate of electoral votes for Democratic nominee Joe Biden in several contested states. Rep. Mo Brooks (R-Ala.) initiated the push when he announced his intention to object to the electoral votes come January. Since then other Republican House members have also expressed the same.

For a successful challenge to occur, the objection must be made in writing by at least one House member and senator. If the objection meets requirements, the joint session pauses and each house withdraws to their own chamber to debate the question for a maximum of two hours. The House and Senate will then vote separately to accept or reject the objection, which requires a majority vote from both chambers.

If one chamber accepts and the other rejects, then according to federal law the “the votes of the electors whose appointment shall have been certified by the executive of the State, under the seal thereof, shall be counted.”

A handful of Republican senators haven’t ruled out the possibility of objecting but have said that they would first monitor the developments regarding claims of voter fraud. Meanwhile, Sen.-elect Tommy Tuberville (R.-Ala) has previously suggested that he may join the planned objection by members of the House of Representatives.